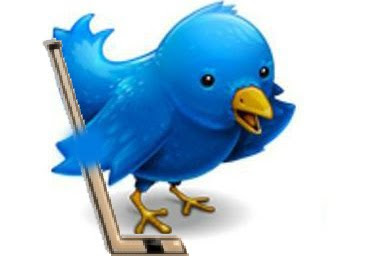 You can read any season preview out there for the in-depth analysis and what each team could do, how they'll do it, and what they need to do in order to get there-- but as you know and as I've stated-- I'm lazy and a hack. So, what better way to do that than to use the newest new media craze and apply it to season previews. That's right, I'll sum up each teams season preview in 140 characters or less in these Twitter previews. Thanks to the help of TweetDeck, I'll make sure it's just right, team name excluded. And if you so please, you can follow me on the Twitter by clicking here.

ANAHEIM DUCKS: Hiller and Giguere will need to be their best with Pronger gone. Getzlaf, Ryan and Perry will get assistance from Koivu up-front

ATLANTA THRASHERS: Everyone will need to be in top-form if they want to keep Kovalchuk beyond this year. I'm looking at you Kari Lehtonen.

BOSTON BRUINS: If Thomas and Chara and keep on top of their award winning best, odds are the Bruins will be playing in June with or without Kessel

BUFFALO SABRES: Vanek was a big time player and, along with Miller, will have to keep on top of their games in order to get into the second season.

CALGARY FLAMES: Another Sutter behind the bench could mean success, but heat is on the defense to play better. Iggy, Olli, and Kipper can't do it all.

CHICAGO BLACKHAWKS: Off-season issues will be haunting, but maturity will be shown on the ice to make up for it. It's also all on Huet now to shine.

COLORADO AVALANCHE: First full season without Sakic, the young guns will step up. It's Stastny team, while Duchene may be a year away from prime-time.

COLUMBUS BLUE JACKETS: Mason and Nash must continue to be the prime attractions, as the Jackets try to build off their 1st, though short, playoff stint last year.

DALLAS STARS: If Turco and Richards can rebound, as well as support from others; the Stars can be back in the NHL's elite again.

DETROIT RED WINGS: While the core still remains from last season, but question of which Osgood will show up will always be present.

EDMONTON OILERS: New coaches, new goalie, but the questions remain of how much offense will show up with the brand new systems in place.

FLORIDA PANTHERS: Loss of J-Bouw will hurt a bit, but the young crop of forwards and steady Vokoun should be able to make up for his departure.

LOS ANGELES KINGS: A team that seems to be on the cusp of something great, but will still need seasoning together before the good things can happen.

MINNESOTA WILD: Starting from scratch without Lemaire and Gaborik, Backstrom will be the keystone in the new outlook for the Wild.

MONTREAL CANADIENS: Off-season spree may or may not pay off, but it's up to Price to stay rock steady and give his teammate a chance.

NASHVILLE PREDATORS: It'll be a dog-fight to see if Rinne or Ellis will be the main guy in goal, but a healthy Arnott will help them get back into the playoffs.

NEW JERSEY DEVILS: Lemaire is back, Brodeur seems healthy; but little to no scoring will make the trap system inevitable.

NEW YORK ISLANDERS: Tavares's addition may help garner attention, but carousel of goalies will be the real story for this once great franchise.

OTTAWA SENATORS: All the Heatley drama will continue to play out, which could take the pressure off Leclaire's play, especially coming back from injury.

PHILADELPHIA FLYERS: With Pronger and Emery in the fold, the Flyers will win the physical game if nothing else.

PHOENIX COYOTES: Will they stay or will they go?? The off-ice drama will trump anything Gretzky and the boys do on the ice.

PITTSBURGH PENGUINS: The Cup champs better hope for little to no hangover, but they have the talent to carry them back to the Finals for a third time.

SAN JOSE SHARKS: No team has more to prove than the Sharks. Nabokov, Thornton, and (especially) Marleau will need to be in top form to silence the doubters.

ST. LOUIS BLUES: Another team that is on the cusp, but a healthy Erik Johnson will help continue the Blues road to redemption.

TAMPA BAY LIGHTNING: Even with their circus, Tanguay should be able to boost Lecavalier and St. Louis. Goalies still sketchy as hell.

TORONTO MAPLE LEAFS: Burke will keep the show lively, even if the on-ice product is somewhat lacking. Gustavsson and Schenn will be the key players.

VANCOUVER CANUCKS: With Luongo and the Sedins locked up, plus tons of defense; the question is will this game-plan pay off in the end.

WASHINGTON CAPITALS: Ovechkin will be back again, but Knuble's addition will help out plenty. Theodore and Varlamov will be neck-and-neck for playing time.

There you have it. All thirty-teams, Wazz's season preview-- all in Twitter formation. It's my lazy way to get my two-cents in before training camp gets into full bloom. Enjoy it, don't enjoy it-- I told you I was a hack, so you can't say you weren't warned.
Posted by ScottyWazz at 1:45 PM