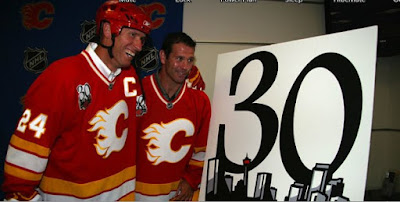 The Calgary Flames join the long line of teams to hark back to the '80s with their latest third jerseys. Also, they officially unveiled their 30th Anniversary logo, which was leaked on their website last month.

The jerseys themselves are classic. They are the original Flames wear and one where they had most of their glory days and when they won their Stanley Cup. Plus, it breaks up the streak of most teams donning the black third jerseys, like they did with their horse-head jersey back in the late '90s. It's the one I most remember of the Flames and will give the "'C' of Red" even more clout when they play in the Saddledome. 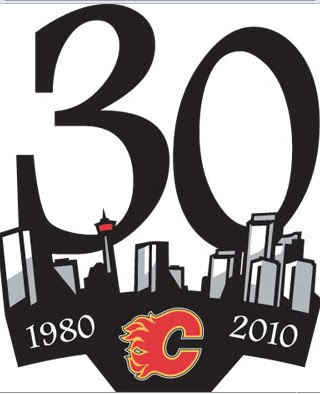 As far as the 30th Anniversary logo goes...I'm not too sure. It has the the silhouette of the downtown Calgary skyline with the Calgary Tower prominently displayed and the only red in the skyline. However, the large 30 in the logo is a bit off-putting. It doesn't really flow with the whole font or feeling of it to be honest. It seems to overshadow the design of the great logo, otherwise. However, if the team feels it's good, sobeit.

As a whole, it's a passing day for the Flames. They put out a great jersey design, one of which many where waiting on for a while, and they have a semi-decent anniversary logo to go on throughout the whole season. It's better than most.
Posted by ScottyWazz at 1:34 PM

Diggin' on the throw back to the original jersey look.

The aniv. logo I could do without. The 0 is a different size than the 3 and it's making me nauseous... or maybe that's all the cold medicine. Whatever. Go Flames.