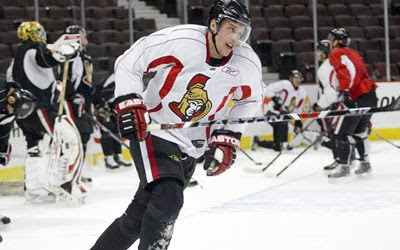 After months and months of bickering, bitterness, and speculation, the Dany Heatley saga is finally over, as the left winger was traded from the Ottawa Senators to the San Jose Sharks, a team said to be the destination for Heatley for the longest time. In return, the Senators get right winger Jonathan Cheechoo, left winger Milan Michalek, and a second round pick. The Sharks also obtain a 5th rounder.

Citing unhappiness in his role with the team, something disputed by everyone within ear shot, Heatley had asked GM Bryan Murray for a trade in May, for which the news got out and started to spread like wildfire after the playoffs had ended. It was hard to move Heatley, as he had a no-movement clause in his contract. A clause that had twice nixed a deal the Senators had with the Edmonton Oilers.

For the Senators, they get two solid forward, but two that can be very streaky at time. Cheechoo has the ability to be a big points guy, but needs the right chemistry to do so. Especially considering how flooded the right side is for the Sens, with Alex Kovalev and Daniel Alfredsson ahead of the pecking order, he'll have to adjust his game to more of a shut-down role if called upon. With Michalek, he's a solid winger on the left side with three straight 20+ goal seasons and a solid plus/minus rating of +47 in that time, as well. He'll probably be up for the top slot on the left side, which could see a bigger output in his production.

As for the Sharks-- they better hope that Heatley doesn't add to their playoff heartache they've been accustom to. However, Heatley does add another scoring option for an offensively sound line-up. With Joe Thornton as his center, you can believe he'll be somewhat revitalized and get plenty of chance to get back to his 50-goal form from a few seasons ago. Plus, odds are he may get the same amount of ice time he's looking for, though the Sharks are somewhat deep in all positions, so you wonder if this will pose a problem at all should he slump and lose some ice time.

Whatever way you slice it or dice it, the fact is this drama is over. For all the speculation, hearsay, and everything but the kitchen sink; the deal is done and the final destination is where many people thought. Even with Bryan Murray and Doug Wilson denying, they knew that it would come down between them to get a deal done. Also, you have to wonder how seething Murray is and if we would need a rain-slicker to get through his rage. I mean, Murray lost out on valuable free agent time because of not getting a deal done sooner, he missed out on resigning someone like Mike Comrie, who could have given some spark between the second and third lines. I guess it's hindsight now, but Murray must be hoping ownership gives him a mulligan on this off-season in hopes of keeping his job on a possible disappointing season.

Now, Sens fans can move on with their lives for now and get ready for the new season. The only time they'll see Heatley is if the two teams meet in the Cup Finals, a match-up that doesn't seem likely if recent history has shown us anything.
Posted by ScottyWazz at 12:40 PM