How Much of a Risk is Buccigross Taking?? 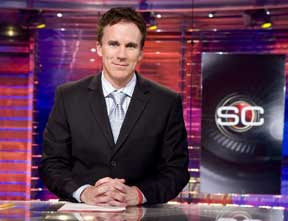 By now, many people know that ESPN's John Buccigross is putting his neck out on the line saying that Dany Heatley will be dealt soon and even after people have debunked this rumor, he is standing by. Greg Wyshynski has the basic premise of this story and Bucci's determination to stand by the story over at Puck Daddy.

While people are getting their kicks bashing this report, the thing with Buccigross is here is that if this is wrong, he may lose the trust from NHL fans due to it. Buccigross is probably one of the top hockey personalities and fans love him. Having dealt with him in the past on FOHS, he's a great guy-- funny, insightful, and never one to mince words. My fear is that if he's sticking to this story gung-ho and gets it wrong; some people may turn on him and he may lose creditability, like others have in reporting a story from "sources" that go nowhere. We all know who I'm alluding to, so I don't have to really go into it at nauseum.

And if Bucci's sources lead him wrong and they make an ass out of him, how could he personally recover from that?? Will he actually lose more than creditability because of it?? Not saying ESPN will can him or anything like that, but how can you trust a guy who is being led in the wrong direction from trusted sources, sources who are passing on confidential material, as well. It could be a while for people to take him seriously again if he claims to have a story or some kind of inside insight to one thing or another. It could make people turn on him and may make his appeal go downward. Albeit, I don't know how likely it is, but this is all worse-case scenario stuff right now, just to show the doomsday issue at hand.

Of course, if this does go down like he said it would-- then he can throw it in the face of the doubters he had out there. I would like that to be the best scenario because I like Bucci and I think he's good for hockey fans in the States. However, claiming something like this and having it blow up in your face, if that is the case in this situation, could be more damning than not reporting it at all and not following the lead. It begs the question is it better to run with a story that may not have legs and has been falsely reported before, or to keep it quiet and lose out on the scoop that actually had the right outcome to it??

The thing you have to hand to Buccigross in all of this is sticking by the story, even after people in the thick of the situation have crapped all over you about it. He's holding true by what he saw and not going to let anyone else try to sway him differently. If nothing else, he's going to be the captain going down with the ship if he's wrong. If he's correct-- he can basically run the hockey rumor gestapo because Bucci's got the hook-ups.
Posted by ScottyWazz at 11:50 AM