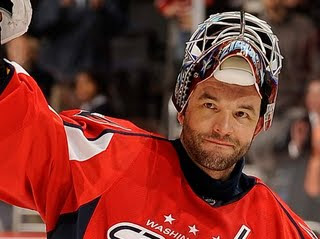 I'd be a fool to not talk about the career of the great Olaf Kolzig, a man who was really the face of the Capitals for many years until passing the torch to Alexander Ovechkin, but I think I made my mark over a year and a couple months ago. Sure, it was a bit early, but he had a forgettable eight games with the Tampa Bay Lightning and was traded in name only to Toronto and then it was over.

Plus, he could be in the best Caps commercial that we can find on the internet:

He is pure class. He lives in Tri, and he and Stu Barnes have their annual golf tourney here, and I've volunteered at it. He is always so nice to the volunteers, thanks everyone for helping out, just an amazing guy.

This commercial is one of the best hockey commercials ever. EVER.