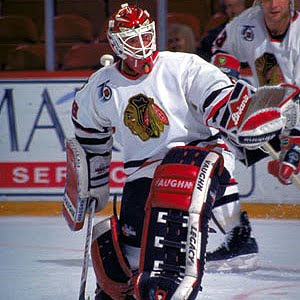 This installment of the AGMs could be the first goalie we've seen that could be a first-round bust in the realm. That's because it's another case of an all-star in junior hockey not being able to pan-out, even though he was able to be good enough to push Dominik Hasek out of a job in Chicago; which can be the silver-lining and the name of his autobiography. However, Jimmy Waite made a decent back-up and decent goaltender in Europe when he went over there.

Waite's major junior career started off with a bang with Chicoutimi Sagueneens, going 23-17-3 and gaining a spot on the Canadian World Junior's team the year the Piestany brawl broke out and got Canada disqualified from the tournament. Post-season, Waite won the Raymond Lagace Award for defensive rookie of the year in the QMJHL, which upped his draft status. It upped it enough to get him picked 8th overall by the Chicago Blackhawks, over the likes of Joe Sakic, John LeClair, and Theo Fleury. Waite was going to be the man who took over for Darren Pang and Bob Mason after another year in juniors. However, it was going to get a lot more jumbled.

Back in junior for the 1987-88 season, Waite had a overall slip-up going 17-16-1 in 36 games, but was able to ganner a gold medal in the World Junior Championship in Moscow over the Soviet Union, plus winning the top goalie of the tournament after all was said and done. Though his season was a little sloppy, everything was looking like Waite was ready to take over the reigns in the Blackhawks organization.

That got off to a rocky start in his rookie year, as Waite got lit up, going 0-7-1 in 11 games and then broke his collarbone in December, which put him out for the rest of the season. It was a craptastic year for the Blackhawks goalie-by-committee they had going with Waite, Pang, Alain Chevrier, and another rookie by the name of Ed Belfour. Waite got back into the swing of things with the IHL Saginaw Hawks when he was recovered, going 3-1-1 and priming himself for a solid year in the next season.

The next season, 1989-90, saw Jimmy Waite get the starting role.....but in the IHL with the Indianapolis Ice, with Chevrier, Jacques Cloutier, and Greg Millen taking the role in Chicago, while Ed Belfour was playing with the Canadian National Team for the year; coming back for the playoffs. Waite went 34-14-4 with a 2.53 GAA for the impressive season, but in his limited time with the Hawks (four games), he went 2-0. In 1990-91, Waite was still in Indianapolis (26-18-4, mind you) while Belfour had his break-out season for the Hawks, leaving the former first round pick fighting to stay in the system. It was a clog in the pipes with Belfour, Millen, Waite, Dominik Hasek, and Cloutier in the system with something to give.

While Waite was able to get past the clog in order to get to the '91-'92 season, it was still unknown how well he's be able to play and if he'd stay up in the organization. The season started off well enough with Waite getting a good amount of starts, going 3-1-1 in his first five, but the wheels fell off as Waite went 1-6-3 the rest of the way and was sent down by January of 1992. In the minors, Waite bounced between Indianapolis and Hershey Bears of the AHL. Waite didn't fair much better going 4-7-1 in Indianapolis, but did better in Hershey with a 6-4-1 record there. Luckily for Waite, after the smoke cleared in the 1992 Cup Run for the Hawks, Waite was left with Belfour as the only two goalies in Chicago. It would be Waite's last horrah in Chicago, as he faltered again going 6-7-1 during his 20 game stint, but it wouldn't be enough for the Hawks to keep him, as they traded Waite to the Sharks in the summer of '93.

It was quite the unimpressive stint along the Bay Area for Waite, as he only played 15 games behind Arturs Irbe going an unspectacular 3-7-1 during that time. The next season was, of course, the lockout for half the season and as things got rolling again, the Sharks traded Waite back to the Windy City for a conditional pick. Waite went onto play with the Indianapolis for four games, then appeared twice for the Hawks; but the Hawks picked up Jeff Hackett, which put Waite as the odd-man out. In '95-'96, Waite was back in Indianapolis posting a 28-18-6 for the season and spending only 31 minutes in net for the Hawks that season. Same went for the next season, with Waite spending the weight in Indianapolis (22-15-4), but played two games with the big club going 0-1-1.

During the waiver draft, the Phoenix Coytoes were the ones who picked up Waite in order to help out Nikolai Khabibulin out for the year. In 17 games that season, Waite carried his slack with a 5-6-1 record in the 1997-98 season. The '98-'99 season has Waite getting some starts here and there, but a bruised thumb and hand during the season pushed him to the minors with the Utah Grizzlies of the IHL and Springfield Falcons of the AHL, along with Phoenix. Waite went 6-5-4 in Phoenix, 3-4-1 in Springfield, and 6-3-2 in Utah.

The summer of '99 saw Waite get picked up by the Toronto Maple Leafs as a free agent, but Waite didn't see any more time in the NHL. Waite was placed in St. John's in the AHL and didn't impress much, putting up a 20-37-4 record in the 1999-2000 season and a 12-25-4 record in the 2000-01 season. With waining interest and waining stats, it would be the last time that Waite would play regularly in North America.

After that season, Waite signed on in Germany spending his first two years with the Essen Mosquitos and Iserholn Roosters, but has spend the last six seasons with the Ingolstadt ERC Panthers of the German Elite League. Waite has flourished in Germany with three straight awards for most outstanding goalkeeper from 2004 to 2006. However, Waite is still looking for a team, as he is now a free agent after a couple of subpar seasons record wise.

It was a lot of trials and tribulation for Waite, but he found his sweet spot playing in the minor and Europe, which can be the silver lining after not doing too well in the NHL where he was being built up to be the next big thing for the club. Granted, he wasn't the first player to be touted as that and won't be the last. Even though he's 40, here's hoping he'll be able to catch on with another club, as he seems to be able to play at a solid rate at his age.
Posted by ScottyWazz at 8:00 AM