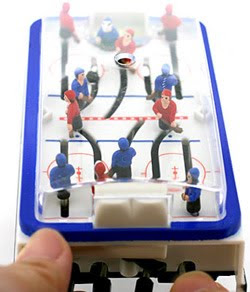 It's been a wild ride in the East for the Bubble Boys extrava-Danza, but the Southeast Division will close us out for the East. If I had something more clever, I'd be a better writer.

ATLANTA THRASHERS: Major knee surgery will hinder the emergence of Angelo Esposito at the start of the season, but some in the Thrashers brass hope that the young center can get healed up enough to contribute mid-season and beyond. It shouldn't be hard for Esposito, since Atlanta is a little weak up the middle and could use any help they could get, I'm sure. Also, Noah Welch will be battling with Joel Kwiatkowski and Anssi Salmela for the sixth and seventh spot in the defensive rotation. The defense will be a big question, especially with the departure of Garent Exelby.

CAROLINA HURRICANES: The last spot on the left side will be determined by two former WHL stars, Zach Boychuk and Drayson Bowman, both of which have the ability to move up in the line-up, should they prove they are good enough, even though they'll be in tough with Staal and Cole already top two on the left hand side. Brandon Sutter will challenge for the fourth center role, but all three would have gotten better looks if they were on the right hand side. Defensively, the top-6 seems set up now, but Tim Conboy, Anton Babchuk, Bryan Rodney, and Brett Carson will be scratching and clawing to try and crack the everyday line-up or at least get the bus pass back and forth.

FLORIDA PANTHERS: With the departure of Jay Bouwmeester, the defense will be looking for someone to step up and there's where the most bubble aspects are. Two prospects of Keaton Ellerby and recent draft pick Dmitry Kulikov could make a huge push for the Panthers roster, though Kulikov could be sent back to juniors, in order to give him just a bit more experience. Elsewhere, it seems to be really solidified, though the battle between Michal Repik and Kenndal McArdle on who's going to be next in line for the open left wing spot, a spot that seems status quo for the league.

TAMPA BAY LIGHTNING: There's a logjam on the blue-line where there wasn't one last year. However, the bulk of defensive influx will create a big competition. While odds are Victor Hedman will get a spot, but who will be bump?? Will it be David Hale, Matt Walker, Lukas Krajicek, or Kurtis Foster?? Do they now have too many defensemen to go with their absurd amount of forwards?? Forwards, Martins Karsums and Brandon Bochenski will be fighting on the left side, with Steve Downie going against Paul Szczechura and Lauri Tukonen for a position on the right side for a final spot.

WASHINGTON CAPITALS: There's plenty of questions abound with the Caps, especially with Karl Alzner and John Carlson waiting in the wings for the defense, maybe bumping Jeff Schultz and John Erskine for their spots from last year. Up front, the acquisition of some free agents have the likes of Boyd Gordon and Matt Bradley jockeying for position on the right hand side, Dave Steckel and Keith Aucoin fighting it out for the center spot, while the left side will see Quentin Laing, Oskar Osala, and Chris Bourque going for the final spot there. Not to mention what's going to happen with the goaltending situation with Jose Theodore, Seymon Varlamov, and Michal Neuvirth battling for those two positions. This team is a case of too much talent and not enough spots, which is good and bad at the same time.

That's what's up with the East and starting next week, we're going to be hitting up the Western Conference, which should be just as relevant for most folks.
Posted by ScottyWazz at 11:00 AM