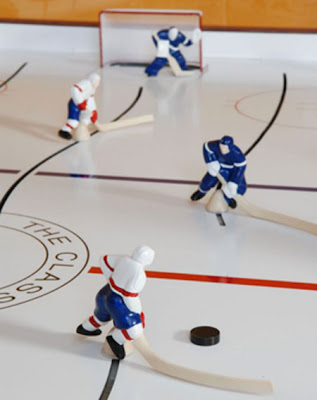 John B. L. Soule coined the phrase, "Go West, Young Man" and we shall with this gimmick, as we get back to the bubble players, now in the Western Conference, but still going East to West. That's why we start with the Central Division.

CHICAGO BLACKHAWKS: While many are split on what to do with Kyle Beach, he could be challenging for the final left wing spot, just to add an antagonist to the line-up. However, will the headache of Beach's past be worth giving him a spot, regardless of how good he plays in training camp. Another match-up to look to in the later months will be between Troy Brouwer and Jack Skille, who will be trying to get into the everyday line-up when Marian Hossa comes back into the fold, especially since Adam Burish is done for six months with an ACL tear.

COLUMBUS BLUE JACKETS: While the team may be set, especially with the addition of Sami Pahlsson, the battle for the last center spot will be down to Andrew Murray and Michael Blunden, the latter performing well last year in the minors and could be doing enough to get an everyday spot. The rest of the line-up seems pretty set, though Grant Clitsome could get some time defensively with the big club, which would be fantastic for jersey sales of his.

DETROIT RED WINGS: With the departure of Marian Hossa and Mikael Samuelsson, it's finally the time for Justin Abdelkader time. Also known as "Afro Gator," Abdelkader played solidly in the playoffs for the Wings and will be the energy guy for the Wings in years to come. Newcomers Kris Newbury and Jeremy Williams will be duking it out for the final spot on the left-hand side, while Jimmy Howard could be looking over his shoulder at Daniel Larsson or some other free agent for the back-up spot to Chris Osgood.

NASHVILLE PREDATORS: Kevin Klein could be on the hot-seat back on the blue line with Jonathan Blum, Cody Franson, and Alexander Sulzer coming up through the ranks and seem to be ready right now. Though Klein was a regular, the Preds may not be ready to hold them back. Also, I wouldn't be surprised to see Cal O'Reilly challenge Jerred Smithson for the final center slot on the everyday line-up.
ST. LOUIS BLUES: It could be time for Alex Pietrangelo to crack the line-up, which could spell curtains with Roman Polak or Mike Weaver. Of course, they have to hope Pietrangelo can stay out of harms way, unlike last season, and he should be fine. In the opening of the card, you can bet that Cam Janssen and B.J. Crombeen will be duking it out to be the enforcer for the Blues. Ben Bishop could challenge Ty Conklin for the back-up role; but it's not likely he'll be successful, even though he could be legally classified as a giant.

Next stop, Northwest Division because the next closest team is in said division. Fantastic.
Posted by ScottyWazz at 10:20 AM