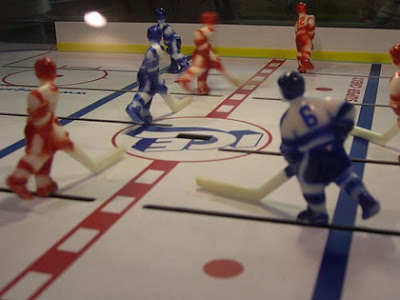 While it may not be a debate about the Moors vs. Moops or a terrible movie with Jake Gyllenhaal, but it's a reality for some players when it comes to the training camps. This will be a six-pack series when it comes to some players who are on the cusp of breaking a full-time spot on the main roster and are "on the bubble", hence the name. Starting out from the East to West, we start out with the Northeast Division.

BOSTON BRUINS: The right side could be the big story developing in the Bruins line-up. While the question of whether or not the Bruins will have the ability to bring Phil Kessel back onto the roster is prevalent, but another battle will be between whether or not either Byron Bitz and/or Brad Marchand could make the squad. A lot of heat on Bitz last season with his gritty play could land him on the 3rd or 4th line duty, but Marchand's future this season could depend on what happens with Kessel. Marchand's first pro season was pretty solid, with 41 assists in 79 games, with 15 points in 16 playoff games, ranking third and second in team points respectively. If Kessel isn't brought back, Marchand could reap the benefits.

BUFFALO SABRES: The long and the short of it will be the guys to look at in Buffalo. First, you have Nathan Gerbe, who is a going to be in tough on the left side of the Sabres roster. While had a decent first season in professional hockey, scoring on almost a point-per-game clip in Portland of the AHL, he got brought up for 10 games and played respectable in those, only registering one assist. While his 5'5 stature could work against him, one good camp could get him a spot. On the back-end and taller end, the 6'7 monster on the blue line Tyler Myers could get his rookie year off big if he can crack the top-six, which isn't outside of the realm of possibility. His physical presense and hockey sense could be working in his favor.

MONTREAL CANADIENS: It's been a long-time coming, but the lack of total depth on the right side could bring Mathieu Darche some luck. While Darche is somewhat accomplished in the minors, he's never really hit paydirt in the NHL. While Darche has the size and skill, can the execution come along with it. Also, some wonder if Yannick Weber can crack the Habs line-up over the stacked back-end they have already. Weber contributed two points in four playoff games for the Habs, but his size could be his downfall for this year.

OTTAWA SENATORS: There's plenty of questions with the Senators, let's be honest here-- but a couple interesting notes will be whether or not Erik Karlsson will be able to get into the line-up for the defense and what will become of Brian Lee if Karlsson does crack the roster. Also, whether or not Ilya Zubov can get into the line-up and actually do something to bring some secondary scoring for not only the team, but for himself. Zubov's hot streak could spark a fire under Chris Kelly or Jesse Winchester to actually play to a higher level and stop slacking.

TORONTO MAPLE LEAFS: There's a lot defensemen in the Leafs' orchard (HA!! Arboritum joke) right now, which will make you wonder how they'll be able to deal with eight solid defensemen with six spots available. You have to figure Mike Van Ryn is going to be on the outside looking in, but what will happen with Garnet Exelby. Maybe Exelby will be switch back and forth with Jeff Finger for that sixth defender on a nightly basis and wondering which one will be dealt first. Plus, with Jiri Tlusty's season for the Marlies' last year, if Brian Burke will be put onto the main roster for a full-season or if he'll be put to the side for more seasoning. Also, where Rickard Wallin will fit into the forward scheme and if he can adapt smoothly to the North American game.

Next Bubble Boys edition will be cruising down to the Atlantic, so get ready for that next time.
Posted by ScottyWazz at 12:20 PM