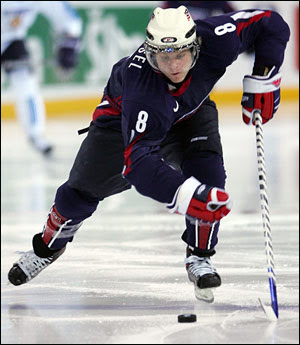 Another week down and another saga is put to rest. Phil Kessel was sent to Toronto from Boston for a first and second round pick in 2010 and a first round pick in 2011. Kessel then signed a five-year, $27M deal with the Leafs. Thus ends the longest speculation this week.

Now, Kessel was pretty much bumped out of the Boston roster with their spending this off-season, but doesn't mean he wasn't a valuable asset. Even though he's not available until November due to rotator cuff surgery, Kessel is going to add to the amount of young talent the Leafs have stacked up on their roster right now. At 21, Kessel will probably be the focal point on an otherwise lacking Leafs offense.

However, you have to wonder if Kessel will be able to carry the work load of an entire offense right now. While he did pretty well in Boston, he had plenty of help around him. And while on the surface, the Leafs have improved for the short-term in the pre-season, who knows what's going to happen when there's actually competition on the ice playing at top-form. Of course, this is also pending on how he's going to do coming off the shoulder surgery; though his youth could definitely help him in the healing process.

But it comes back to who's going to be dishing him the puck. Kessel undoubtedly benefited from Marc Savard being his centre, but who's going to be the key guy to pass Kessel the puck and give him all the chances to score?? Will Mikhail Grabovski and Jason Blake be capable enough to give Kessel the puck enough for him to be effective in the role?? Obviously there's people smarter on the topic than I am, like those folks at Pension Plan Puppets, who will definitely give you a great fan perspective of the whole thing-- good and bad.

Until then, I have to say that Brian Burke does it again. With the youth movement already via free agency and all, he could give up the picks and get some rostered talent in return. Who knows what those picks could turn out to be, but as it stands right now-- Burkie continues to be one of the smartest men in hockey today.
Posted by ScottyWazz at 1:25 AM