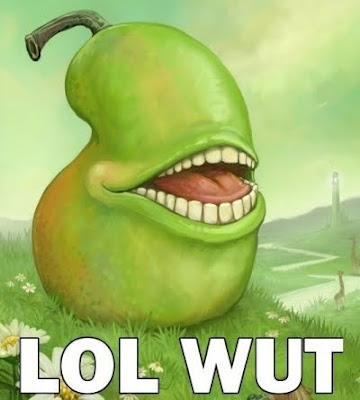 These are things I have seen in the fantasy hockey drafts I have participated in this year. I don't think "flabbergastery" is a word, but with something like this-- it should be created as one. While these players are good by their own right, no way in hell they should be going this high. It's not like I went into a public league where there are many people who are blind who the good players are and who to avoid.

And when I'm there watching such absurdity happen before my eyes, it's makes you flustered as an owner. Of course, I'm a psychopath and it could just be me who thinks that, but you usually go in with a plan and course of action of how you're going to pick, depending on your position. You try to forecast where things are going to fall when it comes to those picks before you. Yet, when a swerve like these happen, you often have to catch yourself and rearrange everything you were thinking in terms of what you need to pick. Often, you miss top players in the pool because people forget about them because they don't get picked when you thought they would.

Same goes with positions, like goaltending, going one pick after another. You often rush your next picks to that position because you feel that if you're don't pick someone up now, you're going to be left with the back-up goalie of the minor league affiliate before you know it. Of course, depending on your draft position, you may have to do back-to-back panic picks because odds are, you won't get a chance to get a pick of the litter.

However, to avoid the panicking, you have to have the roadmap to what you're going to do into draft. Even if you are picking late in the odd number rounds, odds are you're plotting five or six picks ahead, just so you have options. With the length of time between picks, you have the time to do the research and run the quick numbers in your head.

Granted, it's late to give away pointers now, but it's just the craziness that I've seen in the past few days when it comes to my own drafts that makes me look back in hindsight and make you wonder what kind of drugs these fellow players in your league are taking and if you can get them where you live.

Best of luck in your leagues and pools. Here's hoping you weren't one of the foolish to actually pick guys way too high. And if you are....consider this your 15 minutes.
Posted by ScottyWazz at 9:00 AM