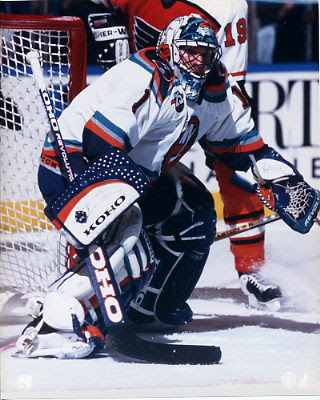 Oddly enough, this addition of the AGMs is somehow a continuation of last week's inductee, Jimmy Waite. This is another goalie from the Chicoutimi Sagueneens in the QMJHL who was picked in the first round, but for one reason or another-- never panned out as a starting goalie in the NHL. This week's installment of the AGM is Eric Fichaud, a memorable but forgetable goalie at it's best.

After a semi-decent season in midget AAA, Fichaud started off his major junior career with Chicoutimi during the 1992-93 season, immediately being thrown into a split starter's role with Sylvain Rodrigue, who I think is the only Latin-Quebecois in the history of the game. The next season, Fichaud was a key part in Chicoutimi's season, which saw them win the President's Cup, the QMJHL championship. Fichaud went 37-21-3, was named playoff MVP of the QMJHL, the top draft pick award, and the Hap Emms Memorial Trophy for top goalie in the Memorial Cup. With all the accolades, it was easy for the Toronto Maple Leafs to pick him 16th overall in the 1994 Entry Draft. In his final year of juniors during the 1994-95 season, Fichaud's playing time was limited as he struggled at times and had a young upstart in Marc Denis playing better than him in most cases.

Fichaud also had to deal with his first trade in the NHL without even playing a game, as his rights were traded from the Leafs to the New York Islanders for Benoit Houge and a draft pick. So, to start off his pro career, Fichaud went to the Worcester Ice Cats, the Islanders primary affiliate. He had a so-so season, going 13-15-6, but had respectable numbers of a 2.93 GAA and .913 save percentage. Thanks to some injuries and issues with Jamie McLennan and Tommy Salo, Fichaud got his chance in the show to back up Tommy Soderstrom. Fichaud appeared in 24 games that season and went 7-12-2 on a fairly bad Islanders team.

In the 1996-97 season, Fichaud was the starter for the beginning of the year, with Salo as his back-up after Soderstrom apparently got disenchanted with the team. It was a rough start for Fichaud, as he dropped nine of his first 16 starts and the play of Salo was good enough to take the starting job away from Fichaud. For the year, Fichaud finished 9-14-4 with a 3.10 GAA and .899 save percentage.

The 1997-98 season was the start of the end for Fichaud's NHL career. While Fichaud was a back-up to Salo, he got a start in December. During that, Fichaud injured his shoulder and was sidelined for seven games. Fichaud came back for six more games, but then was shelved for the season as he underwent surgery to repair the shoulder. In that season, Fichaud finished with a 3-8-3 record

That summer, Fichaud was traded twice. First, he was shipped to the Edmonton Oilers for Mike Watt, then before the season; Edmonton sent Fichaud to the Nashville Predators with Drake Berehowsky and Greg De Vries for Jim Dowd and Mikhail Shtalenkov. Fichard started out in Milwaukee of the IHL, going 5-2-1; but when he was called up to back-up Tomas Vokoun due to Mike Dunham being down to injury, Fichaud went 0-6-0 and dislocated his shoulder twice, the second time resulting in another season ending surgery.

The summer of '99 saw Fichaud recovering again and getting traded again, this time from Nashville to Carolina for a third-round pick. Fichaud was the back-up to workhorse Arturs Irbe, who didn't allow Fichaud to see much time. Fichaud was 3-5-1 in the games he played, but was placed on waiver in February of 2000 and picked up by the Montreal Canadiens. The Habs then sent him down to their AHL affilate, Quebec Citadelles where he proceeded to go 4-1-1. Fichaud started the season in Quebec for the 2000-01 campaign, having a brief stint in Montreal after being called up for injuries, in which he went 0-2. In Quebec, he played .500 hockey going 19-19-2 that season. It would be the last NHL action Fichaud would see.

At the start of the 2001-02 season, Fichaud announced his retirement from pro hockey, but it was short lived. He played later on in that season with the Krefeld Penguins of the German League, then came back to North America playing for the Manitoba Moose of the AHL. He was signed by the Canadiens at the start of the 2002-03 season, but played for the Hamilton Bulldogs, the Habs AHL affiliate, for that season and the next going a combined 30-18-6 in those two seasons.

At the start of the 2004-05 season, Fichaud moved to the semi-pro Ligue Nord-Américaine de Hockey (LNAH) and played his first three seasons with Quebec RadioX and another one with St. Georges CRS Express. He is currently a free agent and it's unknown if he'll actually play once again.

There was high hopes for Fichaud when he was in juniors-- a classic butterfly goalie who could become a star player in the NHL. However, thanks to injuries, inconsistency, and horrible teams around him; Fichaud's bright career was stopped short of even blooming. Who knows what could've been for Fichaud if he could stay healthy and have support around him, but that's what happens with most careers of promising players-- always what-ifs.
Posted by ScottyWazz at 8:15 AM