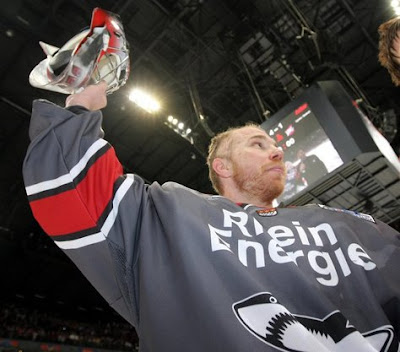 Sad follow-up from something I wrote in November, as German National goaltender Robert Mueller passed away today at the age of 28. Mueller had been dealing with an inoperable, incurable brain tumor, but still found a way to play this season for his club team Kölner Haie.

Mueller did all he could while he was still on this Earth and after he played the hand that he was dealt and it seems to show some kind of inspiration as a whole to the human spirit. Albeit, he knew what he fate was, he never showed any kind of sign of getting down on himself or letting this beat him without a fight. Even though he was drafted into the NHL and went to some training camps, he stayed in Germany and made a name for himself on the international stage and was a huge success. Kölner Haie has retired his #80 and word is that the German league as a whole could do the same.

It's a little bit of a sombering moment, what in this time of playoff drama and high emotions based on a game, but it does give the sport a bit of a reality check for people who could take it a little too seriously. Mueller's legacy of fight and determination is something that would be considered second to none and really is an inspiring tale of facing adversity and fighting through it. May he rest in piece knowing that he has touched the hearts of many in the German hockey community and the hockey community as a whole.
Posted by ScottyWazz at 1:10 PM