McGuire May Be Minnesota's Monster 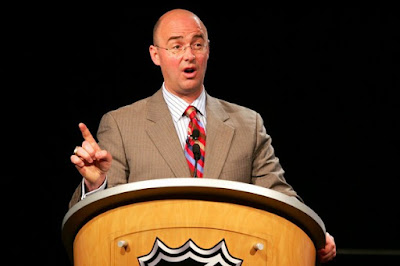 Reports out of St. Paul have the Wild short-listing for their possible replacement for their GM position and it seems that TSN analyst, color-blind advocate, and all around annoyance for some people, Pierre McGuire seems to be the front runner for this position.

Now, say what you will about this man, but he has a decent hockey mind and could take over in this position and flourish. He may be loud, obnoxious, and hated by many who can't deal with his shrill voice and commentary, but when you stop to listen to what he says; it actually makes sense. You have to remember, he did help coach the Penguins to a Stanley Cup as a scout and assistant coach in '91 and '92, so he has the ability to go into a deeper role and have an eye for talent and knows what will work with the line-up out there.

Other non-factors that may or may not work into his favor for getting this job-- his real first name is "Regis", he was born in New Jersey, and he's got TV savvy. Thanks to Wikipedia for the first two.

The fact of the matter is that many may rejoice about him being off the TSN and NBC broadcast, and they could be right in doing so; yet I think this could help out the Wild or anyone else looking to fill a GM position. While he's crazy, kooky, and at times insane and beligerent-- he has a mind for hockey, which could be priceless to have someone that available with that much knowledge on the game and knows the players well from his time as a broadcaster and getting to know them more. With those connections, it could prove invaluable to when it comes to trades and free agencies......or not.

The only downside to this is that during TSN's Trade Deadline show, Darren Dutchyshen won't have McGuire uncomfortably close to him again in the studio.......you know, that may be the best for everyone.
Posted by ScottyWazz at 10:13 AM