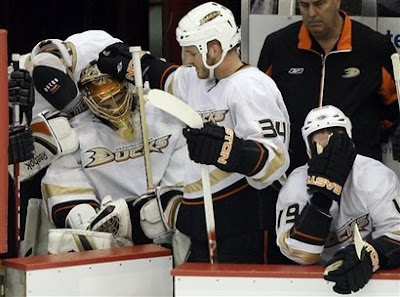 As an eighth-seed, the Ducks weren't supposed to get past the #1 team in the NHL, but they upset the San Jose Sharks and put the defending Cup Champs to the brink. The Ducks weren't the usual 8-seed, but because of their sub-par season leading up the playoffs, they got stuck in the back. Of course, they got some much needed surprises and got some attention from those who didn't think much of them from the on-set.

The biggest surprise is the emergence of Jonas Hiller. Yet, the wonder about Hiller is if he's going to be yet another in a long-line of Anaheim back-ups that has a stellar run and the falters outs in the next season. Just ask Martin Gerber and Ilya Bryzgalov. While J-S Giguere could be the top guy heading into next season, knowing what Hiller is capable of should allow the Ducks many options when it comes to who to play next season.

Up front, the core of the Ducks remains, with Ryan Getzlaf and Corey Perry leading the way. Bobby Ryan broke out in the playoffs and will be in a contract year, so you can expect some big things from him next season, which should be a great help to the Ducks forwards. While Rob Niedermayer is the real big name not under contract next season, he could be let go by the wayside if the Ducks feel they have players coming through the pipe in order to fill his role at a cheaper price.

The big news will be on defense and who the Ducks will and want to get back into the fold. Of course, Scott Niedermayer, Bret Hedican, and Francois Beauchemin are all UFAs and may or may not be back. With Niedermayer, you can bet that he may considering retirement and play that gimmick again. With Pronger still in the fold, you can bet Niedermayer may want to step aside and let Pronger run that team. Beauchemin and Hedican are both affordable pick-ups, though Hedican could call it a career since he is getting up in age and may not get the offers he wants. It could be a change of pace for the Ducks defense if they can't get their big guns back.

The Ducks could be a new look team next season, which could be either good or bad for the team as a whole. While the front line has been fantastic and should grow like that for a while. The defense and goaltending will be the big question marks and wait-and-see period of the whole thing. The new look to it all may be the big deal and could be the thing that makes and breaks the Ducks for next season.
Posted by ScottyWazz at 10:20 AM