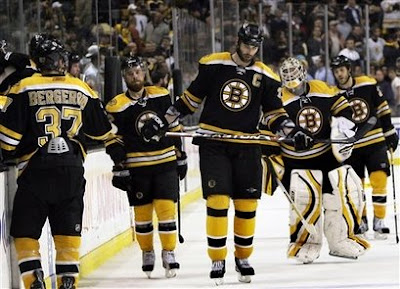 For the Boston Bruins, it must have been disappointing. They had the best record in the Eastern Conference, dominated all the way around from start to finish, and after an easy first round; they got caught by the Hurricanes and now are left to wonder "what if" this summer.

Obviously the main story was Tim Thomas coming up huge for the Bruins in net and pretty much becoming the front runner for the Vezina Trophy. Rewarded with a new contract, we'll see if Thomas is for real with this new contract or if this was all a dream season. Plus, it'll be interesting to see how much time Tuukka Rask gets in net next season, as you can image that Manny Fernandez isn't gonna be back. Rask has been a prospect for a while now with two different clubs and you have to wonder how long he can be hindered before he just falls off the map and his stock completely falls out.

The good thing with the Bruins is that most of their core is still together for next season, which will be good in the growth and development of the team. There's only a few question marks, one being what to do with Phil Kessel. There's been plenty of speculation that he has worn out his welcome in Boston and could be shipped out or allowed to walk as a RFA. Kessel had a career year this year, which could get him many suitors out on the market. Yet, something about him may rub people the wrong way. The Bruins could be willing to move him if they believe that Blake Wheeler can be a solid contributor to the team. Plus, if Byron Bitz can develop a little more, he could be a suitable alternative as well. The Bruins also have David Krejci, who was second in team points and is a RFA this summer as well.

That aside, the contribution that Michael Ryder provided is something that could ease any pain the Bruins could have losing anyone on their team. Plus, they have Marc Savard signed and who knows what Marco Sturm could do, if he can stay healthy. Though the lack of production from the likes of Patrice Bergeron could be a bit concerning for some, especially considering he was supposed to be the big scorer for the Bruins.

An upside of things is the defense, Zdeno Chara was again solid and could be the next Norris Trophy winner, Dennis Wideman came on like gangbusters this season, both putting up 50 points this season. Matt Hunwick showed signs of becoming a solid contributor this season, which could get him a new contract for next season as he is a RFA. Hunwick could be a cheaper option than UFAs Shane Hnidy and Steve Montador, though Montador is willing to throw the mitts now and again, which may get him a small contract.

The season was a great one for the Bruins, another building season that could have been more if they hadn't hit a hot team at the right time. If they can keep this potential up for next season, they'll be in good shape moving forward. Claude Julien has been able to keep these guys in check and should be able to keep getting his message across to the squad and keep them growing throughout. It's not that much of a consolation that they need, but it should be something to help them moving forward.
Posted by ScottyWazz at 9:30 AM