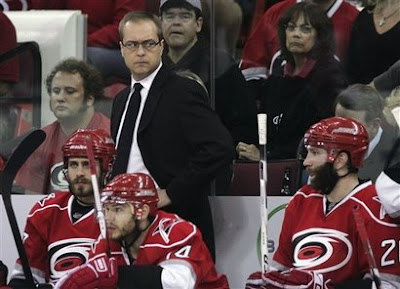 They had a gritty effort through and through, but the Carolina Hurricanes ran out of steam when it was the most important, in the Eastern Finals. After two hard-fought seven game series prior, you can bet that they just ran out of steam and could keep pace with the Pittsburgh Penguins.

However, the season wasn't all that good until after the trade deadline. In their last 10 games, the Canes were 8-2 and one of the hottest in the league, mostly due to the play of Cam Ward. Ward seemed to pick it up towards the end of the season and showed the style that won him a Conn Smythe back in '06. However, it seems that he could get much help when it came to the Conference Finals, which ruined what could have been a successful season otherwise.

Speaking of the defense, the only solid players on the blue were Anton Babchuk and Joni Pitkanen, while the other regulars were somewhat subpar in their own end, but guys like Joe Corvo and Dennis Seidenberg made up for it offensively. Seidenberg is a UFA, while Babchuk has RFA status for the summer, but I suspect both should be re-signed because the budget will allow it to happen. If they are able to fix up defensively, it could help out a lot for a run next season.

However, it's going to be up to the offense to get a little more proactive. Of the 16 playoff teams, the Canes only had more goals than four teams. While the addition of Erik Cole helped a little, the brunt of the pressure was put on Eric Staal and Ray Whitney. Whitney had another solid season, while Staal seemed to have a downer year not living up to the expectations set. While Staal did step up in the playoffs, he'll need to show more during the regular season to help his team get a better position. The grand surprise was the offensive output of Jussi Jokinen and Chad LaRose in the playoffs, both are free agents, Jokinen being restricted. Both should command a healthy raise if they re-sign with the Canes.

Cole and Tuomo Ruutu are the other two forward who are free agents of substance, which means that the core can remain together for another year. There's some talent coming up through the ranks, but the Canes could be looking at the free agent market to bring in some more scoring to the team for the next season.

Odds are that if the Canes had a solid first half of the season, they could have put themselves in a better position for the playoffs. However, they got hot when they needed to be and went into the playoffs with a hot goalie, which usually is the thing to get you far in the playoffs. They were renamed the "Cardiac Canes" with their late game surges, grabbing victory out of the jaws of defeat. Even then, they ran into another hot goalie and couldn't overcome the deficit this time.
Posted by ScottyWazz at 8:25 PM