Alright, I won't lie-- I'm on vacation right now visiting the family and friends from Maryland, so doing anything productive outside of playing hockey, catching up, and drinking isn't at the forefront, so this is a brief rundown of the Conference Finals. 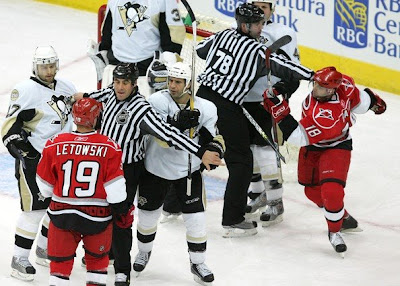 The Penguins are coming off a grueling series with the Capitals and you wonder how much it took out of them. Albeit, the Pens looked pretty good in Game Seven winning handily and the rest could help them heal-- the fact remains that they are going to be in tough against a team like the Canes. This is the second straight year for the Pens to be in the Eastern Final and their experience in being here before should help them focus and not get too excited over it. If Evgeni Malkin can be the force he started to be at the end of the second round, then the Pens could be unstoppable. Add that to M-A Fleury's stellar play and it could be a perfect storm for the Pens.

Speaking of unstoppable, Eric Staal has been on quite the tear and been the life force for the Canes offense, while Cam Ward is looking like the goalie who won the Conn Smythe in the 2006 Playoffs. The Canes may not have the dynamic offensive force that the Penguins may have, but the Canes are getting scoring from all over with Jussi Jokinen and Chad LaRose being the unlikely contributers for Carolina. There are still some leftovers from the 2006 Cup team, so the experience could be good enough to focus those with inexperience of it all. However, you wonder how much the two seven-games series have taken out of the Canes, especially since they have been fighting for a spot into the playoffs for the last part of the season.

PREDICTION: Penguins in 6. While the Canes could be a nice story of the underdog, the seven games serieses they had to endure will have taken a lot out of them physically and really not make them outlast a much fresher Pens team.

WESTERN CONFERENCE DETROIT
RED WINGS vs. CHICAGO BLACKHAWKS
(Note, Game One is already over with as I write this) 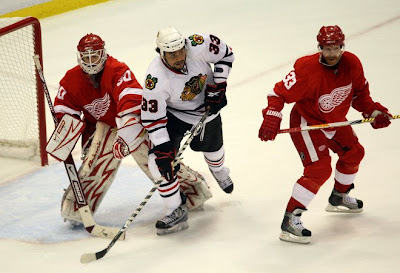 The Red Wings keep on going, though their series against the Ducks went much longer than they want, but it looks like the Jekyll/Hyde act of Chris Osgood is in full effect. There's times he was on, times he was off-- but luckily the team in front of him were able to adjust to fit which persona was in net. Johan Franzen looks like he's back in full playoff form, leading the Wings again in points thus far. However, the non-productive nature from Pavel Datsyuk should be something that is alarming to the Wings. While it's good they can produce without him, yet to get him going would be the best for the team in general.

The cardiac Hawks are still in this and show that they could be showing that being young with no fear is going well for them. While Martin Havlat is leading in points, the youth movement has gotten much of the press. Patrick Kane, Kris Versteeg, and Jonathan Toews have been decent contributors in their first playoffs, though their even-strength play will have to get better in order for them to be successful in this round. The story though has been the stellar play of Nikolai Khabibulin. Khabby has been able to come up huge at times when his team has needed it and has showed the form that gave him the starters job in the first place. He'll need to really be on in order for him to help lead the Hawks over the Wings.

PREDICITION: Wings in 6. As great of a story as the Hawks have been, they will probably be no match for the depth and experience of the Wings. This far into the playoffs, experience will be crucial and the Wings have just that, which should lead them into another Cup Final.
Posted by ScottyWazz at 11:10 PM