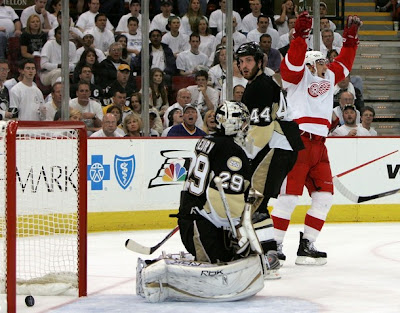 Welp...here we are again. A re-match of last season's Stanley Cup Final with the Detroit Red Wings coming out of the Western Conference and the Pittsburgh Penguins coming from the East. Not many names have changed, though one prominent name switching from one side to the other-- which could cause plenty of animosity.

That's right, the focus of this is that of former Penguin/current Red Wing Marian Hossa facing his old team, facing the team he didn't have much faith in making it to the Cup finals again. Well...doesn't his face look red. Like the Penguins needed that much more motivation for revenge, they have this little Hossa deal looking over them to hype them up some more. Of course, Ty Conklin is another of last year's Penguins in the finals again, although his factor may not be as great. However, this is Conklin's third time in the Cup Final in the past four years-- it could be his year. It seems he's not only Winter Classic karma, he's Stanley Cup karma.

Looking at the goaltending first, both Chris Osgood and Marc-Andre Fleury are playing as amazingly as they did last season, though the edge could be given to Osgood just because of the defensive help he has gotten in front of him. Yet, one slight bad bounce for Osgood could change this whole series and shift momentum on a dime. That said-- if Osgood can get some help on the offensive side of things, if he could get the support he has been getting in the first two series-- he'll be just fine.

Defensively, the Red Wings were without Nicklas Lidstrom for Games 4 and 5 and without Jonathan Ericsson for Game 5 and still held the Blackhawks to only two goals. The depth of the Wings blue line is insane and it seems that they have an added intensity from last year. On the opposite side, the Penguins have had their shaky games and let the opposing offense strike too many times too quickly. For the Pens to be successful, their defense will need to be in shutdown mode and not let the Wings get multiple chances on M-A Fleury, because if they do-- it's not going to be pretty.

Finally, on the offense-- the Penguins have the two top guns in Sidney Crosby and Evgeni Malkin, who are arguably the best one-two punch in hockey today. The Wings knows this and will do all they can to shutdown these two-- which means the role players will need to step up even more than they have been. Ruslan Fedotenko and Bill Guerin will be the key secondary guys who will be looked at to step up. The Wings have really been without Pavel Datsyuk for most of the playoffs since his ineffeciency has been at the forefront and him missing some of the Blackhawks series showed it was more than a slump. However, Johan Franzen has recaptured his playoff magic, Henrik Zetterberg is showing why he got a long-term deal, Dan Cleary and Darren Helm are even chipping in as grinders. Oh yeah-- some guy named Hossa using his puck-possession to control the game hasn't hurt either.

PREDICITION: Wings in Six. Same teams, same results. I'm sorry Pens fans, but the depth for the Wings is far too much to overcome in my eyes. The fact they can be without their captain for two games when the series momentum could have shifted and they outscore their opponent 8-2 in those games is very telling. It could be a very fun series to watch, depending on what happens to the Hossa situation, but it's the Cup finals and it'll be the last NHL hockey we'll see until September and we may as well enjoy it, regardless your team affiliation.
Posted by ScottyWazz at 6:31 PM