CHL Living On The Edge 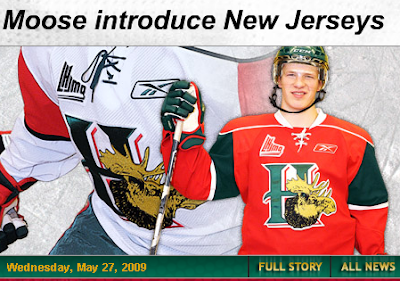 Due to a small leak by the Halifax Mooseheads, it seems the Canadian Hockey League is switching to the RBK Edge templated jersey system. On Wednesday, the Mooseheads put up the screenshot above, which looks like it's the new Edge system design. This would make sense since most of the players from the CHL get drafted into the design in the NHL or get sent to the AHL, where they have the Edge design as well.

However, this irks me because this could be yet another way to go a templated design and have not any originality of it all. It also makes sense this would happen with the Windsor Spitfires switching jerseys mid-season to a design that is already in the Edge way of life, the Washington Capitals template. The Mooseheads are taking the Wild design and all kinds of fun stealing should follow I'm sure.

We'll keep an eye on this because I believe the CHL could be some of the best jerseys out there in the hockey world and who knows what kind of awfulness could come from this whole switch to the new streamlined designed of uniform system.

Thanks to "Dante X" at the CCSLC for the catch of design change.

EDIT: As I was looking more through the CCSLC, the London Knights have gotten a new retro logo for their jerseys next season. In the press release, it also says that the CHL and Reebok have the jersey agreement that can't be revealed until September. Fun.....
Posted by ScottyWazz at 11:38 AM

I agree, the reebok template has been a blank palette for allowing reebok to make hockey look the way they want it to look. It's certainly no coincidence that hockey sweaters look very similar to what Reebok did to the NFL with overused vertical thin piping. The CHL has some of the most classic sweaters (and some of the worst) but nothing good is going to come out of the Reebok redesigns