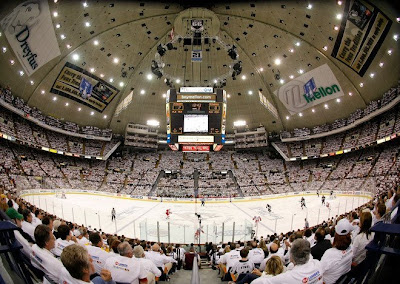 I preference this by saying this is not a dig against the Penguins and their fans, but a venture into why something like a white out won't work and why it shouldn't go to anyone outside of Manitoba.

As we all know, the color-coated themes by fans in the playoffs-- Calgary's "C of Red", Washington's "Rock the Red", Philly's "Orange Crush", and the Islanders "Navy (First) Overalls"; but the one big thing that irks the hell out of me is the "White Out" in Pittsburgh. It's not so much the sacrilegious part of it by taking a hallowed gimmick by the Winnipeg Jets (may they rest in peace), which actually had a meaning to it and had legs throughout the entire hockey community. Sure, other hockey teams and college teams have tried and this and it has worked out for the most part because that's how most fans roll, but the Penguins thing irks me more than anything and here's why.

My complaint is the Penguins don't even wear white at home anymore-- and haven't since the '03-'04 season-- so why wear the white to the games?? The colors of the Penguins are fairly unique to the NHL, with the Bruins having the only close scheme to them. Why not do something with the black, which is a little hack, sure-- or the Vegas gold they have?? You'd think a team would think outside the box and not steal material like they were Carlos Mencia....allegedly. You'd think that the road team would try to convince themselves that the white-out was for them, since they are in white while playing, and hype themselves up that way.

Fact of the matter is this-- don't take a great hockey tradition that was enstilled by a dead franchise and try to make it your own or say it's an homage. If you want to be original, so something that's going to put your own stamp on it and going to make you stand out. If I'm a Jets' fan, the white-out is sacred and while it's understandable that the Coyotes did it when they got into the playoff, it's still hurt to see something that was tradition move away from your area. The Penguins doing it must be 1,000 kicks to the groin with Jets fans seeing it.

So, note to the Pens and Pens fans-- let's buck the hack trend of unoriginality and maybe do something to put your own seal onto something you'll be doing year-in and year-out. You have a good team and good color scheme to do something spiffy-- make it happen.
Posted by ScottyWazz at 9:00 PM

I'd be impressed if it was a powder blue out.

Wow....you know, that'd be super awesome now that you mentioned it.

Powder blue out would be amazing to see...

Although the feat of seeing that many people wear the same colour (no matter what/where it is) is still impressive. *fingers crossed for a red out someday*

First off as you should know the reason we haven't worn white at home since the 03'-04' season is because of the switch the NHL made to "be more alligned with other sports" and make the dark jerseys the home jerseys. Also I would like to point out this year that we did wear white at home against (I believe) Boston. I believe this was in March because Boston chose to wear their third jerseys but could be wrong.

No team in the NHL can do a black out because it is hard for everyone (on ice to off ice) to see the puck when it goes into the net or hits off the glass. Especially for teams like Pittsburgh that have the black netting above the glass.

From what I hear sitting in my seats over looking the ice, and hear thoughout the NHL (other arenas, blogs, and websites) most people don't like the powder blues. I think thats sad since a.) i like them and b.) they go back to the old days of the pens.

I personally don't think the vegas gold out would look that good, and i am not sure that it would be as easy to do. If you haven't noticed most of the liscenced clothing in one of the team "colors" is black, white, or blue.

Plus white is the cheapest to get for the mass that is the army of 17, 132 strong.

I would love to see a "blizzard out" in the burgh... which would be the most unique.. half the shirts powder blue half white.. it would look best if it was every other but that would be hard to coordinate.

1. screw the jets. they suck.
2. go pens! the white out is awesome and so are the pens. best team in the NHL