Coyotes Survive, But For How Long?? 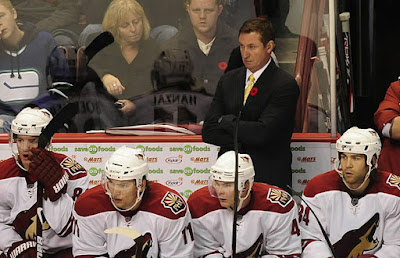 The Phoenix hockey fans got a small reprieve by Judge Redfield T. Baum saying that there wasn't enough to sort out all the legal issues before Balsillie's June 29th imposed deadline. I'll have more on Balsillie coming up later on in the week, but the fact of the matter is that Balsillie's overanxious nature to get another team in Canada is his more endearing quality, as well as his greatest enemy.

In any case, it's now time for the NHL to step up to its promise of having four bidders ready to buy the team and keep them in Phoenix. Gary Bettman and the league's legal team made a big deal about having other interest ready to keep the team where they are at. If these bids don't come down as the best for anyone-- who is to say that it's going to work out in the end. Plus, if there is a bid and the team doesn't get any better and the team continues to hemmorage money-- who's to say we won't be in this situation again five years down the road??

The thing with the Balsillie bid is that it was going to recoop most of the money that the was lost by the creditors. What's to say that these bids that have been talked about and have been flaunted by the NHL are going to be up to that kind of snuff or if they are actually going to relieve anyone of their financial heartache they suffered from the investment into the Coyotes. One of the more interesting quotes or implications from Judge Baum when it came to the other offers is that with no firm offers being out there for the team, he dismisses the bids are hearsay and may or may not even happen in the end.

So, let's say now that these bids that the NHL has made up these stories about these bids, what if there's just been guys sitting around the bar, sipping martini's saying, "Hey, if I bought the Coyotes, I'd keep them in Phoenix", to which the NHL spy took that and ran with it saying they have the money and willingness to keep the team in Phoenix. Truth be told, if there are no bids on the team by any of the suitors the NHL have said there were, how can we even believe that any of these guys had an interest to keep the team in Phoenix, much less keep the team period?? Maybe they had an interest until they saw the books and projections for the Coyotes and then started to back away slowly from it all. All the fans know is that it seems everyone is chomping at the bit to buy a team who has lost more than $300M in 13 years and keep them in their current enviroment. See how crazy that sounds??

So, here we are pretty much the same way as we started. The Coyotes are still in financial trouble, the NHL still promises a white knight to come for the Coyotes and yet no one has stepped solidly to the plate for them, though apparently they are out there. Though one could say that you can buy a team that has its financial woes and turn them into a big money maker, like the Cup Champion Penguins-- but thanks to good management the Pens were able to be built into a champion and get a wealthy investor to believe in them enough to pony up money for a new arena. I don't know if there's anyone who has looked at the books and thought this was still a solid investment when all was said and done.

This Coyotes' situation is far from over, but if what the NHL says is true-- expect bids to pick-up very shortly.....because the league wouldn't want to lose face by not delivering on some promises, right??
Posted by ScottyWazz at 8:25 PM