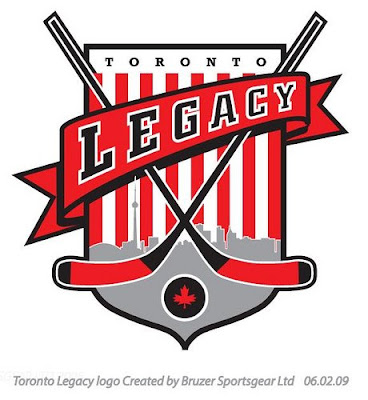 The heat for a second team in the Greater Toronto Area is going strong, with a group putting forth their plan for an expansion team in Toronto. They have plans for an arena, ticket plans, and a name with logo and jerseys already. That's right-- the Legacy is in plan, apparently, for expansion consideration. They have a website and everything, too.

I'll get to the aestethics in a second, but the proposal is a little bit head-scratching in some parts when you look at it. First off, the fact they're going to built a 30,000 seat arena and expect to fill it night-in and night-out, which could be a little outlandish if the economy continues to be this craptastic. Yet, it seems that there's reportedly $1 billion (CDN) is already ready to go ahead with this whole thing, all in private money. Don't know if it's unmarked, unsequential bills....but we'll find out in time, I'm sure.

Another thing is the timing of this whole ordeal, with the NHL dealing with Jim Balsillie trying to get the Coyotes to Hamilton-- they don't need this thing in their mind as well. The NHL has stated they have no plans of expanding. Andrew Lopez, who is the head of this venture, has said that if the NHL says no-- this plan is dead as dirt....which is silly to roll out this whole thing, create a big swaray, and make a huge headline.....then to abandon it just like that. Since Lopez hasn't talked to the NHL yet, you can be assured that they'll shoot this down fairly quickly. Personally, this reminds me of Jim Balsillie trying to get his foot in the door with the Penguins and Predators; not having the approval of the NHL first may be the worst thing you can do and Lopez may soon find this out.

Now, onto the name, logo, and jerseys...which...oof-ta, as the kids may say. First, the name-- I think that the WWE could be suing for naming rights. However, the name is not that intimidating, unless you're going out for a fraternity or sorority-- that's when a legacy gets a little scary. The logo (as seen above) is decent, but pretty busy. It's simple, but complicated-- with the Toronto skyline being the thing that clutters up the whole ordeal. Also, the stripes are a little much, especially for a Canadian team. The jerseys they brought out (seen below) are nothing special, but could work with the basic feel. 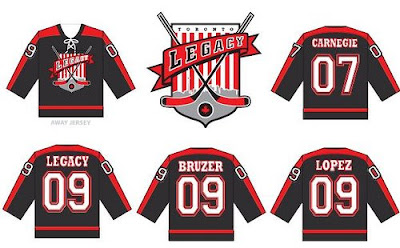 So, yet another group is putting the cart before the horse in terms of trying to get not only another team in Canada, but another team in the GTA. The Leafs, of course, won't like this and will fight it to the death-- but I think this threat isn't going to be as strong as the one they are facing in Balsillie. Yet, I don't think that these guys coming out of the woodwork with their ideas to get a team back in Canada, especially when there's issues abound elsewhere. If anything, the NHL is going to be stricter when it comes to the proposals put forth and probably have the kibosh be put on them quicker than usual. However, best of luck to the crew trying to get the Legacy idea off the ground, though I think it's in vain.
Posted by ScottyWazz at 9:00 PM