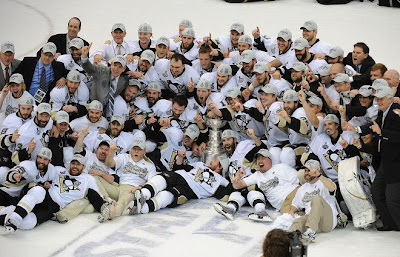 That's one of the many things that the Penguins can take away from this season, this series, this year. From a team who looked dead in the water in February, once coaching change, a couple of trades, and this team is Stanley Cup champions. Plus, if nothing else-- Sidney Crosby gets his Stanley Cup, while the NHL and Reebok reap the benefits of him lifting the Cup.

Next season may see some minor changes for the Penguins. First off, you can imagine Petr Sykora, Bill Guerin, Miro Satan, and Ruslan Fedotenko may not be back next season, though Fedotenko may be one of the few who comes back out of the four. Plus, not to worry for the Penguins, who have one of the best one-two combos in the league in Crosby and scoring champ Evgeni Malkin in their line-up. Sure, the secondary scoring will be an issue, but Jordan Staal, Maxime Talbot, and Tyler Kennedy showed signs of scoring savvy in these playoffs and many Pens fans could hope that they can continue that into October and next season.

Defensive defense is a weak point for the Pens, with Kris Letang and Sergei Gonchar leading the rush more often than not, but the key here is whether or not they will be able to get their top defensive d-man, Rob Scuderi under contract at a reasonable price. Scuderi's stock rose through these playoffs and could be best known for the big stop in Game Six, which gave the Pens the win, for the most part. I'm sure Ray Shero will be able to talk to Scuderi and make him buy into the system and stay with the team. However, you can wonder if there will be a big push to retain the services of Hal Gill (probably not) and Philippe Boucher.

In net, M-A Fleury bounced back big time from the Game Five shelling, and won two big games in Six and Seven, with a huge save at the buzzer in Game Seven to capture the Cup. While the future of Fleury is not in doubt, who will back him up is another question. Mathieu Garon is unrestricted and you wonder if he'll be brought back or if they'll let John Curry to be the back-up for Fleury.

Last year was a start and while the parallels are being drawn to the 1984 Edmonton Oilers Cup team are being drawn and the talk of a dynasty is being brought up-- it's almost a bit of putting the cart before the horse. Let the kids cherish it now and worry about next year in October. It's hard to keep your core together when you have a salary cap to deal with, but let them savor the flavor now, and worry about the future when it comes.
Posted by ScottyWazz at 11:15 PM