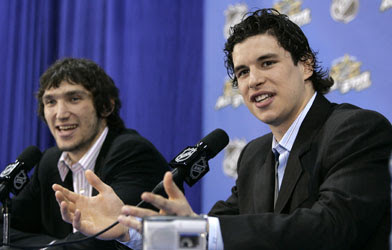 When this whole thing started, the hype was all about the two faces of the league going against each other in a way that the league could branch out to a more mainstream audience and bring some people in who may have not been on board before.

After tonight, after the seventh game of this grueling series, after the last buzzer sounds, the last goal is scored-- it's easy to say this is when the hype wasn't enough to show how amazing this series has been between the Washington Capitals and Pittsburgh Penguins.

And it's not just the stars, Alex Ovechkin and Sidney Crosby going head-to-head-- it's been a team effort through and through. Albeit, Ovie and Crosby have been the focal points and have yet to disappoint this series, the team dynamic has ruled over the mainstream match-up. You've had heroes like Kris Letang and David Steckel take over the headlines for their game winners, you've had stellar performances from Marc-Andre Fleury and Simeon Varlamov, but when all is said and done-- it's been about Crosby and Ovechkin.

The question that is posed now is whether or not one game or even one series can determine who is better between the two of them. Can you really measure the greatness between the two of them when they have been so close in everything when it comes to this series?? Sure, it'd be easy to say one was better than the other if the series was a blow out or if one star took control like noone's business; but these games have been close (five of the six being decided by one goal) and the stats of Crosby and Ovechkin have been mirror of each other for the most part. Is it fair to judge who is better than who because of this??

Personally, I don't think you can. Sure, the odds of this hype being big as this year should these teams meet again in a playoff down the road is unlikely, but the fact remains that one match-up does not a rivalry determine. Sure, you can debate the rivalry of the Penguins and Capitals as one way or another, but to say that this one singular match-up in the playoffs between Ovechkin and Crosby is going to be a precursor to their future match-ups and the future outcome is rather absurded to put it nicely. Both of these guys were under the microscope, both of them had the hype machine behind them, both of them have yet to disappoint. No matter who comes out on top, they should have bragging right for a while, but the debate will continue on. That's the thing with Ovechkin vs. Crosby-- you'll always have one side that going to be homer over another or love one player or hate one player; but the respect value should be there for both players. Sure, this is a very Kofi Annan thing do to, but the debate is great, but the heated hatred over one from another get a bit ridiculous, especially during the playoffs.

We have to admit that we're in a golden age of hockey stars. It seems every year, there's a new phenom just making hockey fans' jaws drop, making people take notice. That will continue with John Tavares next season and will probably get better if Taylor Hall can keep up his pace in the OHL for the 2010 Draft. It's hard to say that one player is better than another unless it's absolutely one-sided, which in most cases it never is. This second round has shown more stars break out of the mold and display their own skills, own personality, own way of play.

The thing is as a collective we need to do is let the petty squabling die down for just a minute, sit back, and take in the fact that this is something we may never see again in our lifetimes where there are so many great players in one league at one time. Enjoy it, folks-- because it's going to be a great ride for the next decade or so watching these rookies turn into royalty.
Posted by ScottyWazz at 8:45 AM