Edmonton's Men on a Mission 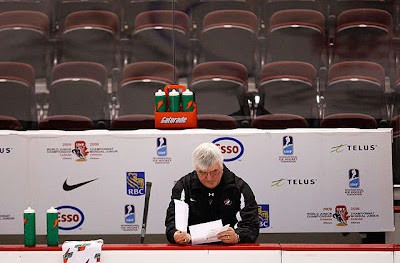 While the title suggests that I'm talking about the early-90s WWF tag team, I'm actually talking about the Oilers new head coach(es) hiring today. Though I would love to see Mabel, Oscar, or Moe behind the bench at some point.

Anyway, Pat Quinn was named head coach and Tom Renney was named assistant coach today. Both have three-years deals and there is an understand that if the Mighty Quinn retired after the contract and both are still with the franchise, the ship will be Renney's to run. I'll get to that situation in a moment, however.

Quinn is an interesting choice, but could be one that's right for the Oilers. Considering what he was able to do with the Canadian World Junior's team this year and the Canadian U-18 team, you can only imagine that the Oilers picked him on the basis that he will be able to get his message through to the younger players, which the Oilers have plenty of. With 15 players under 25 years old on the roster this past season, Quinn should still be able to get to the untapped resources of these kids' talents. He may have the ability to haress the talent, rather than squander it.

The intriguing part of this whole thing is Tom Renney being named an associate head coach, which is fancy wording for assistant coach. With the prospective jobs that are out there in Calgary, Minnesota, and Montreal-- why would Renney be willing to take a job that's underneath him?? Sure, he could still learn from a mentor like Quinn, but he wasn't that awful of a coach when with the Rangers-- he just wore out his welcome quickly. The fact of the matter is that if Pat Quinn's history is telling of something; he won't step down unless it's absolutely necessary, which could spell doom for Renney if he thinks that in three years he'll take over in Edmonton. That puts the Oilers in a rough spot if that does happen, mostly because they wouldn't want to lose Renney if Quinn has shown that the game has passed him by.

Whatever the future for these two bring, they'll cross that bridge when they get to it. The main objective right now is what's going to happen for the '09-'10 season. Since the Oilers went to the Cup Finals in '06, they have yet to make it back to the Playoffs. They have a young team and have talent up and down the roster and in their farm system. It's now time for Quinn to put his years of service to work and show that he still has the touch that made him so sought after. Just hope that he doesn't power trip and try to be GM when he has no power to.
Posted by ScottyWazz at 6:50 PM