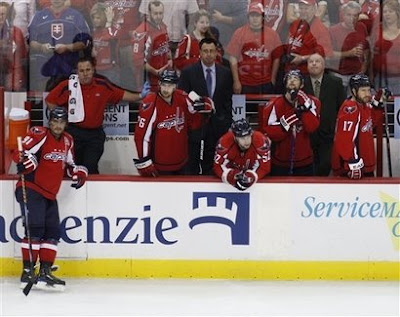 The Caps came back from last year's amazing run with another amazing run, culminating in an epic, dream match-up with a usual rival. And per usual, the Caps came up just short against the Penguins and now look to next year with a new outlook and continue to get better.

The one thing that the Caps were able to find out is their new goaltending star in Simeon Varlamov. When Jose Theodore was down, Varlamov came up and became a folk hero of sort and really showed that he's able to take over the top spot in Washington. Theodore, you have to wonder what's next with him and what's going to happen to his contract considering he wasn't the best when it counted the most. With Varlamov's explosion, you wonder if a buy-out and re-signing of Brent Johnson is in the future for the Caps goaltending.

Up front, three vets are UFAs and it remains to be seen if the Caps will make a play for them. Of course, Sergei Fedorov's decision to play or not will be a big factor, but I wouldn't be surprised if the Caps bring him back, if not for his ability to help the Russians mature, but for his leadership as a whole for his very inexperienced team. Donald Brashear is a muscle for the team, but depending on his price tag, it could be a little much for them to swallow. Viktor Kozlov's play in the second round may have been his swan song in DC and could see him free up a little bit of cash for the blueline funding.

Speaking of which, the defense was another shaky part of the game, but with Mike Green's injury coming out after the series, you wonder what could have happened if Karl Alzner or Sami Lepisto were back there and playing at full health. Digression though, three RFAs for the rear-guard, Shaone Morrisson, Milan Jurcina, and Jeff Schultz are the names and depending on their contract demand may or may not be back. Like I mentioned, you have guys like Alzner and Lepisto ready to go, John Carlson is in the OHL waiting, and let's not forget about Tyler Sloan who had a decent impact. While the Caps could have been better in their own end, the future is looking quite bright depending on who stays and who goes.

This playoff was a baby step for this young franchise and it showed what they could do in the face of some adversity. Alex Ovechkin showed why people think he's the best in the world and the Caps turned plenty of head with their gritty play and their team system of things. If this is an indication of what's going to happen moving forward, then DC will be rocking the red for years to come and not be ashamed of doing professing they are a Caps fan, which is a welcome change from just a few years prior.
Posted by ScottyWazz at 8:10 PM