Which Trends Can Stay 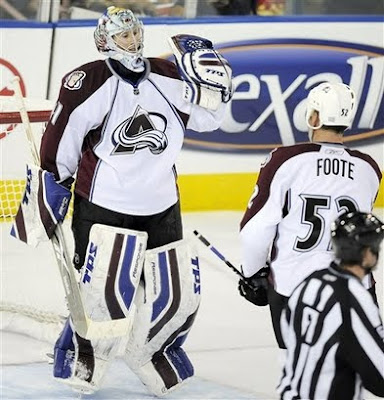 When you look up and down the standings board, you see weird things here in the month of October. What, with the Colorado Avalanche being the top team in the NHL after a horrendous year last year, the LA Kings and Phoenix Coyotes being neck-and-neck for top spot in the Pacific Division, with the Sharks being merged between them. On the flip side, the Detroit Red Wings off to a awful start, being .500 right now, as well as the Minnesota Wild off to a rocky start; even though they did lose a lot on the off-season.

Then the player stats side of things, you see Dustin Penner of Edmonton in the top-five for goals, assists, and points; Anze Kopitar finally coming fully into bloom of superstardom, and Steve Stamkos is showing he has no sophomore slump this year. Guys like Patrick Marleau and Vinny Prospal are off to a huge start, while Craig Anderson is leading in wins and Ilya Bryzgalov leading in shutouts.

With all this craziness, you have to wonder how much of these trends will continue out through the rest of the season. I mean, that's the thing with the start of the season, you're going to have players or teams that will take others by surprise, but once they catch onto the trends, the odds are they'll slow down and fall off the map completely. Isn't that right Chris Kontos?? Whether it be figuring out a goalie's tendencies throughout the year or know the move the forward is going to make, somehow or another the hot-hands at the start of the season which end in November.

Yet, this year it seems most of the trends mentioned could continue on throughout the duration. For the Avalanche and Craig Anderson, I think this is a team would could continue to excel because they have a new direction and seem to have the pieces to keep going surging through the Northwest Division. Steve Stamkos looks like he has the confidence and touch to keep his point production going with the mentors he has in Tampa, while on the other Bay Area team; Patrick Marleau is in a contract year and probably won't come back to San Jose-- so he's displaying his wears for prospective suitors. And why the jury is still out on the Kings situation, Kopitar's emergence is something that's been expected since he was drafted.

On the flip side, the trends I wouldn't expect to continue is, sadly, the Phoenix Coyotes. While Dave Tippett is a god-send for this team, the team has a tendency to start off well and get people talking, but one things leads to another and they fall off the standings board. Dustin Penner is another guy who could be at risk at faltering, though he is one of the few offensive options for the Oilers. While the clip is nice for Penner, if he falls into a slump, no one knows how he could be pulled out of it. Also, I don't know how much the Red Wings slump could last, but this isn't the same team that made the Stanley Cup Final, as it seems that the safety net in goal of an experienced back-up isn't there. Jimmy Howard won't be able to protect Chris Osgood as Ty Conklin did last year.

But more over-- why have all these storylines I've mentioned been out West, sans Stamkos?? Not many are able to pay attention to the Western Conference because it's past their bedtimes out East or the interest isn't there. If the interest isn't there now, it should be. All the big stories are happening out West, all the surprising teams are coming out of the West, and it seems the most parity is out West, with the East pretty much going through the same regular season script as it has in the past years. In summation, I guess the moral is that people need to pay more attention out West since it seems to be the place to be when it comes to regular season storylines.
Posted by ScottyWazz at 10:00 AM

Wow....French is not my strong point. However, I think I have a jist of what you said.

Sean is on vacation, so the upload of the October 28th show is going to be delayed. It shouldn't come as a shock, mostly because it happens a lot.

Therefore, I hope the show is uploaded before the next one goes on the air, but it could become a lost show. You didn't miss much, though-- so count your blessings.