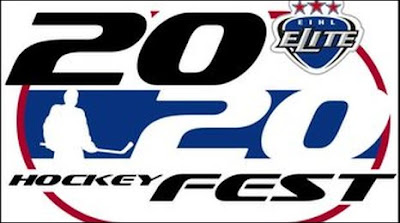 While the title could lead you to the thought of backpacking and getting into crazy troubles much like "Euro Trip", but sadly it's not about that. This is about the new gimmick that those in the Elite Ice Hockey League (aka the British League) tried out this past weekend in Sheffield, England. It's the 20/20 Hockeyfest. Thanks to FOHS fan Anthony for bringing this to our attention.

Basically, the gimmick to the 20/20 Hockeyfest is that all eight teams in the British Elite League would play in a mini-tournament in the same day. But here's the hook-- it would be four-on-four with 20 minute halves, with each half being running time. In the format, the games took no longer than an hour and happened hourly. It went from eight teams to four, then finally the last two participants playing for the title. Huzzah.

Now, it seems like a decent idea, but the execution could have been done a little better. The idea itself seems like a decent idea for hockey fans to get a full day of hockey into their schedule. Yet, it almost seems like a very beer league move for them to do. If you're trying to get a little creditability to the the league, pulling a stunt like that isn't going to win you over any friends. Of course, this whole thing leads to open ice and moves the game along, but it doesn't seem fitting for a professional league.

As our boy Walker pointed out on the FOHS message boards, it almost seems like a pick-up game at the local rink, but with refs and the score being kept during this. As a one-off or pre-season tournament thing, it's fine-- sure, but I don't think it's something that'll be something to hang your hat on, nor do I see any leagues in North America do it.....well, maybe the SPHL. However, the fact of the matter is that this was done as the season was going on and it seems a little out of place of this to happen as the season is going on. It's just another risk for player injury, which could cost a team a win or two due to it.

I'm all for gimmicks and it's something that would be great for the pre-season, but while the season goes on, the focus should be on the season and the heat coming off of that. This whole gimmick being done as the season is going on, I frown upon that happening. With the pre-season, it'll create the rivalry and intensity heading into the season. Plus, it'll put a foreshadowing of the season to come. Maybe it's just me, but I think it's a good way to get the season going and bring more people into the whole ordeal.

For what it's worth, though, it did generate some sort of interest, as I'm here talking about. Like I said, the idea is decent enough if you're going to do this for the pre-season. Yet, if you're doing this as the season starts, it just seems worthless and a little risky for the players participating into it. Plus, it is amongst one place and only satisfies one audience for that day, as opposed to all over the United Kingdom, like the league it. Though, you could move it along like the Winter Classic or All-Star Game to create diversity and to create a bigger buzz in the hockey community over there. I mean, let's be honest-- this buzz could be as big as the Tony Hand chase for 4,000th points or Theo Fleury's escapades in Belfast, so it's something for a nation that is trying to make hockey work.

And if you were wondering, the hometown Sheffield Steelers beat the Coventry Blaze 3-2 in the final game, sending the home crowd back to their homes happy, I'm sure.
Posted by ScottyWazz at 9:00 AM