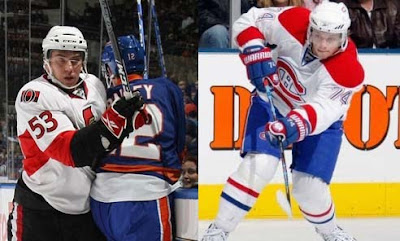 Incidents like what's happening with Sergei Kostitsyn in Montreal and now with Ilya Zubov in Ottawa, both being sent down because they weren't good enough to make the big club, then requesting a trade because they thought they were good enough. It almost makes like these kids don't feel like actually going through the motions of the hierarchy of the system and they can ply their trade in the minors while waiting for their chance in the barrell.

In Kostitsyn's case, he is very good in the minors, but with the Habs organization, he seemed to be wasted. He has a case that he wants to get out of the Habs organization because of mismanagement of his talent and his skill set, so maybe it's justified. The Zubov issue is that he just wasn't good enough to crack the roster and wants to be in a place where he can play in the NHL. Not only did the Senators have to deal with Dany Heatley going this summer, but another prospect last year in Alexander Nikulin wanted to be dealt when he couldn't crack the roster for Ottawa. Nikulin was dealt to Phoenix, but still stayed in the AHL and eventually rushed to Russia for this season.

Whatever happen to the passion of getting to the NHL and actually working to get to that pinnacle?? You look at guys like Denis Hamel, Darcy Verot, and maybe to a lesser extend, Mike Keane-- guys who are willing to toil in the minor leagues and wait for their call for the big show. While Keane has had his taste of the show, including a couple Stanley Cup; the career minor leaguers are willing to toil and usually it's a big deal when they get the call to finally follow through on their dreams of reaching the NHL, if only for one game. They work all the time and hope to get some recognition, but do it because they love the game and would rather being doing that then something else back in their homes.

It could very well be the culture. The players I mentioned about waiting-- all North American players. The players in turmoil now are from Eastern Europe. It could be a case where the entitlement of the European players are a little bit higher, considering they could be in their home country's league and be making better money than they would in the minors of the NHL. People get into their ear, saying they are better than they actually are and could be tearing things up in a place like the KHL or over in their home country's league, rather than paying the just dues in order to get into the NHL.

Point is, that if you're not good enough for one NHL team, what makes you think that you're going to strong-arm your way to another NHL roster?? It's not the way the system works. It's not the way it should work either, because in sport--you have to prove you're better than your peers if you want to get to the top of the mountain, you have to actually climb it-- it's not going to be handed to you. If they aren't good enough, they should take the constructive criticism and work on their game rather than throw a hissy-fit and run away from the NHL because they weren't handed the roster spot they probably didn't deserve in the first place. Man up, pay your dues, and you won't have all this unwanted attention for your negative things and get more attention for what you do on the ice.
Posted by ScottyWazz at 10:00 AM