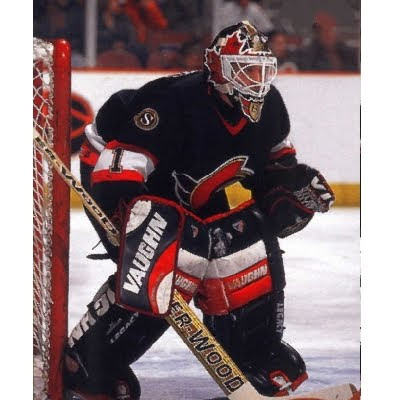 In keeping with the college goalie theme, we move to the Northern Midwest region to get a guy who had a knack for scoring goals, even if his record shows that he should have stuck to playing out rather than playing in net, it's Damian Rhodes for this week's AGM.

The story from Legends of Hockey goes that the passion for playing goal for Rhodes, a St. Paul, Minnesota native, was when he was playing mini-hockey and was able to stone his friend while paying in net, therefore he went to the route of going in goal for his career path. Rhodes got his first taste of notoriety playing with Richfield High School in Minnesota where his 35 games have no document record, but he has a GAA of 4.61 with one shutout to his record. He was able to catch on with the Michigan Tech, being thrown into the starter role right out of the shoot. Even before the season started, Rhodes was drafted by the Toronto Maple Leafs in the 6th round of the 1987 draft, but rather than pass up college, Rhodes passed on the pros for now.

His freshman season, Rhodes played very well. The first half of the 1987-88 season was good enough for him to get a spot on the US World Junior team. Rhodes struggled during that tournamnet, playing five of the seven games and giving up 20 of the 47 goals the US gave up during that tournament. Yet, for Tech, Rhodes finished with a 16-10-1 record in his freshman year. Though, that tournament may have been a precursor to his struggles, as during his sophomore and junior years at Tech, Rhodes went 15-22-0 and 6-17-0 respectively, but after his junior season, Rhodes opted to go pro and start off his career to the NHL. However, before going off, Rhodes got himself credited for a goal in January of 1989 while playing for Tech.

The 1990-91 season was the start for Rhodes career and....boy, was it awful. With the Newmarket Saints in the AHL, Rhodes went a dreadful 8-24-3; but got a call to the big club in Toronto in March of '91 beating the Red Wings and getting his first NHL win. The Leafs moved affiliates from Newmarket to St. John's and Rhodes went with them and took the starting role with him The years in St. John's were good to Rhodes, as he went 20-16-5 in the 1991-92 season and 27-16-8 in the 1992-93 season. His years were good enough for when Daren Puppa left Toronto at the start of the 1993-94 season that Rhodes was able to get to the big club in Toronto.

Yet, for someone like Rhodes, it was the worse time for Rhodes to get the call for the big club, as a young goalie named Felix Potvin was making waves for the Leafs and got the starting role locked up, which basically put Rhodes to back-up duty. In his first year, Rhodes got 22 calls and made his case going 9-7-3 with a 2.52 GAA in that season. The following year was the shortened-season, so Rhodes was only able to get 13 calls and only had a 6-6-1 record to show. In the 1995-96 season, Rhodes got frustrated with his position and the Leafs management could see it. In his 11 games, Rhodes went 4-5-1 and by late January, Rhodes was on his way out of Toronto.

On January 23rd, Rhodes was part of a three team deal between the Leafs, Ottawa Senators, and New York Islanders. The end result saw Rhodes and Wade Redden go to Ottawa, Don Beaupre and Bryan Berard go to Toronto, and Ken Belanger and Martin Straka head off to Long Island. Rhodes was immediately given the starting role in Ottawa for the lowly Senators. That first half season was a write off, but Rhodes got his playing time and went 10-22-4 with the Sens, also posting a 2.72 GAA and .906 save percentage for the season. The 1996-97 season was also unkind to Rhodes going 14-20-14 for the season, but that was a turnaround season for the Sens, as they got their first playoff appearance in the franchise's young history

While the 1997-98 season was shaky for the forwards, the tandem of Rhodes and Ron Tugnutt were able to carry the team to another playoff spot, but it would be Rhodes' time to shine in the playoffs. Many had counted out the #8 seed Ottawa Senators out against the #1 seed New Jersey Devils, especially since the Devils had 24 more points than the Sens in the regular season-- but it wouldn't mean anything. The Sens kept the games close, especially against the top shot goalie Martin Brodeur, while Rhodes stood on his head in the series and was able to steal four games from the Devils, advancing into the second round. Yet, the second round wasn't as kind to Rhodes and the Sens as the Washington Capitals took the Sens out in six and Ron Tugnutt took over for Rhodes, as Rhodes struggled when it counted most.

It was a bit of a confidence boost for Rhodes, who carried the momentum into the 1998-99 season, as he went 22-13-7 and had a goal for his troubles as well. You see, Rhodes was the last person to touch the puck for the Sens before a delayed call was made. However, Lyle Odelein passed the puck to the point, but no one was there. The puck sailed into the open net, as Brodeur had went to the bench for the extra attacker, and Rhodes got his first NHL goal. It was also the first time a goalie had a goal and shutout. However, the season saw the split in starts between Rhodes and Tugnutt go evenly, even in the playoffs, where both got only two games apiece before their quick exit. It was time for Rhodes to be moved along.

On June 18, 1999, Rhodes became the first ever member of the Atlanta Thrashers, as he was trade from Ottawa to Atlanta for the ever popular future considerations. Rhodes then jumped into another starting role for another squad. Or so he would have thought.

The first year of Rhodes' season was a forgettable one, as he slumped out of the gate, going 3-7-2 to start the season, but would be sidelined for 49 games in November of 1999 due to a sprained ankle. Once he came back in March, Rhodes went 2-12-1 down the stretch, which threw his starter's tag in jeopardy. The 2000-01 season was another horrorshow for Rhodes, which had a rough start and was full of injuries. Rhodes started the season 2-3-4 before being sidelined with a sprained right knee in November. Once he returned 18 games later, he rounded out his season 5-14-3 before going down to a strained groin in February, but came back to go 0-2 to end the year.

Thanks to his injuries, Rhodes was demoted to the back-up role behind Milan Hnilicka and only saw 15 games in the 2001-02 season, going 2-10-1 in those games and thus being released by the Thrashers in the summer, due to the depth in the Thrashers system of goaltenders. It would be his last NHL season and had him get his last NHL win against the team he made his name with-- the Senators.

Not being picked up by any other NHL team, the 2002-03 team was a year in the minors for Rhodes. He started off in Greenville of the ECHL and played for the Grrrowl, but went a dismal 2-8-2 before going off the the AHL and playing for the Lowell Lock Monsters for seven games, only going 1-4-0 in those games.

Rhodes seems to have fallen off the grid in terms of staying with the hockey formation, but I'm sure people reading this will correct me in the comments. However, with his struggles and all of that, Rhodes had a decent career but seemed to be given a bad hand with injuries, inconsistency, and playing on some bad teams. Not only that, but being pushed by others and not being able to push back. It is what it is, and if nothing else-- Rhodes will always be remember for being the Perioxide Kid.
Posted by ScottyWazz at 8:30 AM

Except that Damian Rhodes wasn't released by the Thrashers. He was demoted to the ECHL but was still Thrashers' property.