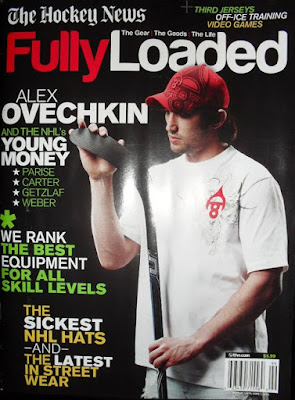 A couple weeks back, I was talking about the ability for the NHL to produce something along the lines of a reality based show to give a greater understand of the inner workings of the hockey life. However, it seems, oddly enough, print media has been the one to really bring out the hockey lifestyle inside and out.

Of course, The Hockey News just put out their own sort of lifestyle mag called "Fully Loaded," which I thought was going to be a monthly gimmick, but only seems to be once-a-year. Granted, the minute I saw it, I immediately thought of The Fourth Period's magazine, which came out around the Draft time and has the same kind of feel to it, but luckily TFP's magazine is a monthly thing and is more of a mix of hockey news and gives kind of a Maxim feel in terms of the picture of some Ice Girls every month which is really.....really great. The Hockey News' one-off has mostly to do with actual gear for on and off the ice, so it's more like a Laptop Magazine with gadgets and stuff.

In any case, I have to say this is the step that hockey fans need in order to get more into the game off the ice. The fact that both TFP and THN have taken this step is a great idea, which I'll say TFP did have first and I'm a bit disappointed that THN is almost ripping them off. Either way, this is just what is needed to give the game of hockey more appeal. Get the fans more into the lives of players and how they live, plus showing off some of the new things apparel wise that fans can get their hands on that they see the pros wear in the post-game interviews and wherever else they may don such things. Any insight into the players and game the NHL could give to the fans, both hardcore and casual alike, will be helpful into making the game more marketable and appealing.
Posted by ScottyWazz at 6:45 PM