What Have We Learned: Opening Night 2009 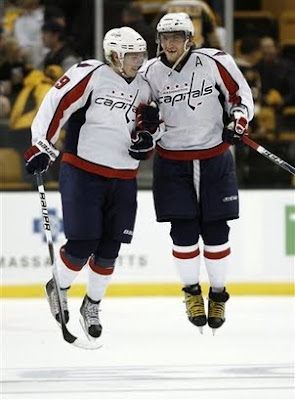 For the first time in two seasons, the NHL started their season in North America, with the two previous stops being in Europe. It had it's ups, downs, and our first overtime of the young seasons. Wins all around.

-Alex Ovechkin picked up where he left off, potting two goals and an assist with Brooks Laich putting up two goals and Niklas Backstrom tallying three assists for the Caps in a 4-1 win over Boston. Jose Theodore was shaky at first, but had 19 saves in his win. Who knows what the situation will happen with the Caps goaltending, but it could be a storyline for the rest of the season. At least the offense is not in question.

-The Leafs definitely showed how much they were willing to throw the body around. The new look team was very physical, but it didn't help intimidate too much, especially with the Habs staying in it all game. Also, the number of penalties drawn could have been avoided and was a cause for the first goal. Matt Stajan was the offensive force for the Leafs, with two goals, which is something they had hoped for from him for a while. However, the goaltending from Toskala is still suspect....at best.

-Meanwhile, the Habs did look shaky at times, but Carey Price took a barrage of shots and got the win out of it. Price looked shaky at times, but was able to keep his team into it. The rest of the Habs, though small, got their top guys going with Brian Gionta and Scott Gomez playing somewhat well during their first game, Gionta scoring a goal in his debut.

-Whether it was the mojo of Joe Sakic being in the crowd or not, the Colorado Avalanche looked good against the President's Trophy winning San Jose Sharks. Wojtek Wolski played an amazing game and showed why he could be the new fire power for the Avs, as his two goals led the way for the Avs. Of course, Paul Stastny, the heir apparent to the Sakic leadership, added two helpers, quietly, for Colorado, as well. Craig Anderson faced a ton of rubber, stopping 38 of the 40 shots he saw; but if this will be the same story every night, it could wear Anderson down quick. Peter Budaj better keep sharp in all of this.

-The Flames retro uniforms are very bright, let me tell you. Also bright is the Flames' role players, who contributed all of the goals for the Flames in their victory, sans Dion Phaneuf's open-netter. Rene Bourque, Brandon Prust, Adam Pardy, and Mark Giordano had the other four goals, while Miikka Kiprusoff was a rock in net for the Flames, like he usually is. However, the new defense didn't look too improved, as Kipper had to face 42 shots, 21 coming in the third period, which was the letdown period for the Flames.

-Speaking of that third period, that's the only period the Canucks seemingly came out for. The first period was a write-off, as Roberto Luongo looked like he did in Game Six of the Conference Semis last year. The new defense was shaky at first, but Willie Mitchell brought up the point of most of these guys not playing alongside each other in the pre-season at all, which ruined chemistry. Also, the lack of aggressiveness early on allowed the Flames to control the hitting game and allowed Calgary to win the small battles-- which set the tone for the game.

-The Conference's two best teams last season really stunk up the joint at the start of this campaign.

-First, the Bruins seemed to control the play in the first period, but something happened during that first intermission which made them have a letdown for the rest of the game. The reigning Vezina winner, Tim Thomas, played well, but still had some letdowns on some goals. That shouldn't be all on his shoulders, as his defense was a little shaky. Although, two goals came on the power play, which could be a lack of discipline for the Bruins in the early going.

-The loss of captaincy may have brought Patrick Marleau out of his shell, as he put up the only goals for the Sharks, but the rest of the team was fairly horrific. While new acquistion Dany Healtey got over 21 minutes of ice time, he was also a minus-3 on the night. Evgeni Nabokov only faced 20 shots and only stopped 15, which is not a good case for him to carry this team. Joe Thornton apparently played as well, though he was really a non-factor it would seem. The only other bright spot for the Sharks was Joe Pavelski, who set up both of Marleau's goals.

So, that's the first night of the NHL season. On Friday, there's morning/afternoon hockey, depending on where you live-- of course. Then everyone plays on Saturday to give people watching Center Ice endless hours of hockey enjoyments. Huzzah for hockey season again-- huzzah!!
Posted by ScottyWazz at 12:40 AM

Was at the Avs Sharks game. Aside from Sakic, I think an important story of the night was in the two rookies and there big roll in the team already. The Avs are the first team to start two 18 year olds (Ryan O'Reilly and Matt Duchene) in the opener since The Jets did it with Shane Doan and Jason Doig in 95-96. Not only did both O'Reilly and Duchene register there first NHL assist, but they played on very key lines. O'Reilly was a first line penalty killer and second line power play. Duchene was a first line power play and a second line pk. They showed they belong on those lines by helping kill several penalties and Duchene even had some quality short handed attempts. Both looked very comfortable and calm in the game and stayed in position. I see good things in the future.