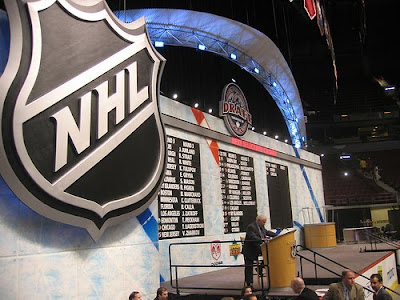 As I mentioned on last night's FOHS, the NHL Media site showed that the NHL has yet to pick the site of the 2010 NHL Entry Draft, which is a hinderance to the media people and some fans who want to plan their summer vacations in tune with the Entry Draft, since it really is a big event for fans to congress.

Of course, the delay could be due to the whole Phoenix fiasco and since they don't know where the team will be from week-to-week, you can't really make the commitment to having something there in June. There's been other rumors abound with the location such as Chicago, Minnesota, Anaheim, and Philadelphia. Yet, while they are places many would like to go to-- I'd want to throw out my idea for places for the NHL Draft for 2010 or future years.

1. Las Vegas, Nevada: While it's a hackney concept, Vegas makes sense in this instance. This is due to the Awards show being held there (date TBA, of course) and it'll cut down on the trips that are needed to be made from Vegas to one of these out places that are not Vegas. Granted, the Draft should be right after the Awards or else you'll have plenty of players, GMs, and executives losing their salaries and cap space on the craps table.

2. The NHL Store, New York: What a better way to mix commerce and new ideals than to hold it in the NHL's own store and introduce the kids to a big swarm of people in the media capital of the USA. Plus, in addition to that-- you bring about a new concept to the player, where as they are picked by their team; they go on a shopping spree with their family to get the merchandise of their new team. Fantastic idea, if I say so myself.

3. Kansas City, Missouri: They have a big, beautiful arena that's probably not going to have anything else there in June, and it'll expose fans from other places to the allure of the Kansas City. Some people may not think it's a hockeytown, but when the Draft comes around, it'll show people why there is such a buzz when it comes to relocating a franchise there over a Canadian city.

4. Jim Balsillie's Backyard: We mentioned this on FOHS, where Jim Balsillie has enough cash to hold this big NHL event in his literal backyard, because god knows his compound is probably big enough to hold 20,000 people, including prospects and their family. And be honest, your Blackberry reception is probably the best it'll ever be in your life time.

5. Washington, DC: If nothing else-- I'd like to go back home and use a vacation week to make a big deal out of this.

While this is all just me, something has to be done in order for people to get their flight information, hotel information, and bar-crawl maps set-up-- we need to know where to be in order to get all prepared for it. Since it's a big deal with people coming from all over North America (and some cases Europe), needing to know this information is vital, especially with putting in for days off....and then making up excuses for why you're just trashed come that Monday.

Regardless of what's going to happen with this, god knows that the FOHS crew will have a story. Whether it be random, psycho hotels or telling someone to play in traffic or making reservations 12 hours before arriving to the location or even blacking out on the shore of the Ottawa River-- there's always a story to tell.....even if we have to piece it together.
Posted by ScottyWazz at 11:49 AM

I like the idea of Vegas... barring any jail time, I think it would be a blast.

this article was a joke,i thought it was a serious but it had more jokes about locations than anything. the NHL store? has this dope ever been there? you would be lucky if you could get every 1st round pick made into that place and have room for 1 person with a camera! plus if he wants all the picks & family to go on a shopping spree they better have gotten their 3 yr entry contract paid in full because that place is WAY overpriced and they have NO harford whalers stuff so what is the sense of even going there anyway?

It is supposed to be a joke, Ram Stew-- if that's your real name....which I hope not, because that'd be silly.

If you haven't followed this blog. which you obviously DON'T, you'd realize there's a mix of seriousness and goofiness-- with the later winning out more often than not.

And no, I haven't been to the NHL Store, but I figured the absurdity of it all would have made you gotten the point, goose.

Enjoy your stay, even if you don't "get it."