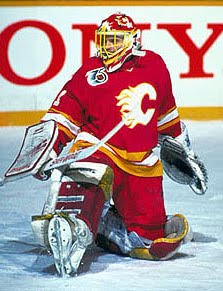 While we went to college the past few weeks, it's time to move back to the junior ranks for the AGM of the week. We move to a guy who seemed to be going under the radar, in the shadow of another goalie at the same time. However, in the end-- it got him a Stanley Cup ring, a Jennings Trophy, and a bronze and silver medal at the World Championships. This week's inductee is none other than Rick Wamsley.

To start out his career in 1976-77, Wamsley split between the OHL's (then OMJHL) St. Catherine's Fincups and the Ontario Junior B Simcoe Jets. During his time with the Fincups, Wamsley was behind Al Jensen on the depth chart, though Wamsley was able to get more time in 1977-78 when the team moved to Hamilton-- doubt that it had any bearing, but just stating facts. The final season in juniors, the team moved again; this time to Brantford, Ontario. The result was the same for Wamsley, though, as this time he was backing up Mike Roy for the 1978-79 season. Even with the adversity and not getting much playing time, Wamsley was drafted by the Montreal Canadiens in the 1979 Draft in the third round.

In his first pro season during the 1979-80 season, Wamsley got a majority of the starts for the Nova Scotia Voyaguers, as his partner Richard Sevigny was called up to Montreal for most of the season. In those 40 games Wamsley played, he went a respectable 19-16-2, though his .887 save percentage left much to be desired. The 1980-81 season saw Wamsley have a less than average season, going 17-19-3 and was overtaken by Mark Holden in some aspect; though Wamsley had five games in Montreal that season, where he went 3-0-1 in his tenure, showing his AHL numbers didn't reflect real well.

His performance for a short time in Montreal allowed him the chance to play from the big club from the start of the of the 1981-82 season, with Wamsley seeing a majority of the games by the end of the season, going a stellar 23-7-7 and a 2.75 GAA for his troubles. Also for his troubles, Wamsley, along with Denis Herron won the first William M. Jennings Trophy for goalie(s) with the lowest GAA and a minimum of 25 games played. Wamsley was able to build off that season for the 1982-83 season, where Wamsley took the starters role again and again amazed with a 27-12-5 record, though his GAA of 3.51 and save percentage of .878 isn't one you often see for a starter. The 1983-84 was a so-so campaign for Wamsley, as he saw his time split in half with Sevingy and saw his quality go down a bit. In 42 games, Wamsley went 19-17-3 with his GAA being another high 3.70 and save percentage at .853, the Canadiens had plenty to think about over the summer of '84.

So expendable, that the Blues traded Wamsley and Rob Ramage to the Calgary Flames for Brett Hull and Steve Bozek, a deal that would oddly help both teams in the long-run. After being dealt, Wamsley only got two games in for the 1987-88 campaign behind workhorse Mike Vernon and went 1-0.

His first year with the Flames in 1988-89 was another memorable one, though his record may not show it. While Wamsley only went 17-11-4, his GAA was its best since he won the Jennings Trophy, going 2.96 for the year. He was also a part of the Flames only Stanley Cup winning team to date, as the Flames beat Wamsley's former team, the Montreal Canadiens, in six games. In 1989-90, the Flames gave Wamsley more time to help out Vernon, and it did well for both. Wamsley went 18-8-6, though the Flames had a bit of a hangover as a whole and didn't last long in the Playoffs. Wamsley's PT dimished a bit in the 1990-91 season, where he only got 29 games with a 14-7-5 record, with his GAA and save percentage being average (3.05, .888). The 1991-92 season would bring change, as Wamsley only played nine games with the Flames, going 3-4-0 with a 4.46 GAA and .850 save percentage. That made him, yet again, expendable.

Expendable as it became one of the biggest trades in NHL history in terms of volume and volume along. The Flames sent Wamsley, Doug Gilmour, Jamie Macoun, Kent Manderville, and Ric Nattress to the Toronto Maple Leafs for Jeff Reese, Craig Berube, Gary Leeman, Alexander Godynyuk, and Michel Petit. Needless to say, it was one of the most lopsided deals out there as well.

The rest of the 1991-92 season, Wamsley sat and waited behind Grant Fuhr and had to fight newcomer Felix Potvin as well for time. In eight games that season, Wamsley went 4-3. In 1992-93, Wamsley was behind Potvin, Fuhr, and Daren Puppa. Wamsley saw only three games in the NHL going 0-3 and played two games with the St. John's Maple Leafs where he went 0-1 there. It would be the end of Wamsley's career.

Wamsley quickly jumped into the coaching game as an assistant from 1995-98 with the Maple Leafs and then was an assistant for the OHL's Erie Otters. After the Otters, the Columbus Blue Jackets came calling and hired him as a goalie coach from 2001-06, then Wamsley moved onto the St. Louis Blues, where he started as a goalie coach in July of 2006 and still remains there today.

With all the ups and downs, it seemed that a change of scenary was what was needed for Wamsley during his playing career. And while he racked up plenty of wins, the fact he had good teams in front of him helped him keep his confidence during off-games he may have had. With all his experience in the game, Wamsley was able to transfer that to coaching, which hasn't turned out too shabbily thus far.
Posted by ScottyWazz at 8:30 AM