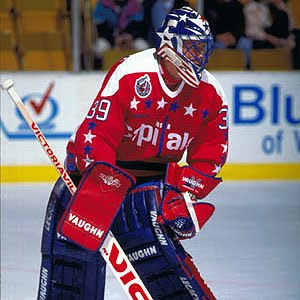 With the past AGM inductees going the major junior route, this inductee made his success in the Division II section of NCAA hockey. It's pretty amazing considering he got noticed in the mid-80s while playing college hockey, which wasn't that much of a hotbed like it is today. Plus, you can almost say his great play helped get his college, Merrimack College, into Hockey East. This week's induction goes to Jim Hrivnak.

Hrivnak grew up in Montreal, where the dream is always to get into the QMJHL, but Hrivnak had a little bump in the road playing in Midget AAA, going 6-8-1 in his first year, following that up with an abysmal 8-22-1 during his second year. Therefore, not many in the major junior would wanted to pick him up, so he went into the US college hockey realm getting picked up by Merrimack in the Boston area, which is where Hrivnak showed his true colors and gathered his game together.

His first year (1985-86) at Merrimack, he saw limited time, with only 21 games to his credit. However, Hrivnak made the most of them, posting a 12-6-2 record, which was leaps and bounds over his time in Midget hockey. Some scouts took notice, as Hrivnak was selected in the third round, 61st overall in the 1986 NHL Draft by the Washington Capitals. That seemed to perk Hrivnak's confidence, as in his sophomore season, Hrivnak went crazy going 27-7-0 with three shutouts on the season. That displayed got Hrivnak on the first all-star team for Division II hockey. His dominance continued as in his junior year, Hrivnak put up an amazing 31-6-0 record with a 2.38 GAA and four shutouts to his credit. In his final year, Hrivnak split time with Brian Hayward, but Hrivnak continued to be stellar, going 18-4-0 in his 22 games with another four shutout display. To this day, Hrivnak is first in school history for the single-season shutout record with four, most minutes played at 2,119, and second for GAA and save percentage in a season.

After his schooling career, Hrivnak went right into the Capitals system playing for the Baltimore Skipjacks. Though he spent 10 games there, it got off to a shaky start going 1-8-0, which may be chalked up to the transition period for the first year pro. In the 1989-90 season, Hrivnak was thrown into the starter's role for Baltimore, while getting the occasional call up (or down since it's South of Baltimore) for injuries. Yet, back in Baltimore, Hrivnak had a 24-19-2 record as a starter, as well as four assists; while during his call-ups to DC, he went an even .500 record at 5-5-0. The next season, Hrivnak also split between Baltimore and Washington, majority of the time being in Baltimore. In Baltimore, Hrivnak went 20-16-6 in 42 games with the Skipjacks, while also potting three assists in those games. In DC during the 1990-91 season, Hrivnak went 4-2-1 in the back-up role when filling in for an injured Don Beaupre.

The 1991-92 season saw Hrivnak truly split between the I-95 corridor, as he spent only 22 games in Baltimore, though he was fighting for playing time behind the other goaltending prospects in the Caps organization, Byron Dafoe and Olaf Kolzig. However, while in Baltimore, he went 10-8-3 for his time there, splitting with Dafoe and Kolzig. For the second season, Hrivnak had three assists-- which showed how well his stick-handling skills were, collectiong 10 assists in 121 games for the Skipjacks, which would be his last there. While with the Caps in '91-'92, Hrivnak got 12 games in, going 6-3-0.

The 1992-93 season saw a lot of change for Hrivnak, as he was never in the minors. He placed himself firmly as the back-up for the Caps behind Don Beaupre. For the Caps, he was able to get 27 games in, holding his own for most of them with a 13-9-2 record, but it wasn't enough for the Caps, who decide to get a little more assurance for their goaltending situation. Therefore, the Caps traded away Hrivnak and future considerations (which turned out to be a 2nd round pick) to the Winnipeg Jets for Rick Tabaracci. In Winnipeg, Hrivnak only saw three games of action behind Bob Essensa, going 2-1-0 in those games.

During the summer of 1993, Hrivnak was dealt again-- this time to St. Louis, where he was saddled behind Curtis Joseph. In his 23 games, he replaced Joseph nine times and compiled a record of 4-10-0, which spelled the end for Hrivnak's NHL career as he decided was put into the minors and was never called back up again.

During the 1994-95 season, Hrivnak split the season between two IHL teams, the Milwaukee Admirals and Kansas City Blades. He had a much better time in Milwaukee, going 17-10-1, while in Kansas City he went a dismal 3-5-2 in 10 games. The next season, Hrivnak started off in KC, but only spent four games there (going 1-1-0) before moving to Las Vegas, where he got some of his mojo back, putting up a 10-1-1 record in his 13 games. It was enough to get a call to the AHL, where the Carolina Monarchs would put him in for 11 games, posting a 1-4-1 record during this time backing up a young Kevin Weekes.

It would be Hrivnak's last season in North America for close to a decade, as he would be traveling around Europe in Germany, England, as well as Finland during his travels. Hrivnak also took time out to be the goalie coach of the Washington Jr. Nationals in the DC Metro area. Hrivnak played one last season in semi-pro hockey in the QSPHL for the Granby Predateurs, going an unimpressive 2-6-1 to round out his career in any professional or semi-professional aspect.

While, it's unknown of his whereabouts now, Hrivnak's career shows that you don't need to go the major junior route to get a gig in the NHL. His college career was able to give him the time to grow as a player and get a solid confidence level to be able to play in the top-tier of hockey. The time he needed to grow, he used perfectly and was able to be the third round pick for the Caps, which-- at the time-- was the highest goalie picked by the Caps in their history until Kolzig, Dafoe, and Jim Carey came in. College works, kids. College works.
Posted by ScottyWazz at 8:15 AM