Should They Stay or Go?? 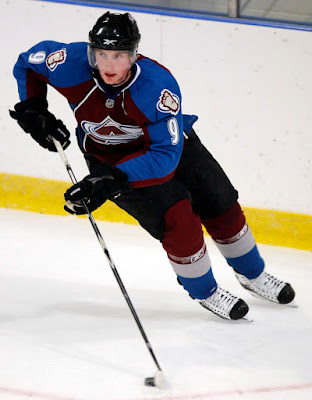 It's almost time for teams to decide whether or not to send their junior aged players back down to the junior ranks or keep them and take a season off of their entry-level deal. Over at NHL Fanhouse, Chris Botta says that Evander Kane is a virtual lock to stay up with the Thrashers. Obviously, the likes of Victor Hedman and John Tavares will be staying up on the main rosters; while the likes of Matt Duchene, Michael Del Zotto, and Dmitri Kulikov are fighting to stay with the big club and are getting every chance to stay up with the big club.

It will also bring about the question on how fast is too fast when it comes to keeping a kid up in the pros. While the likes of Tavares and Hedman maybe no-brainers, the players like a Duchene who could be good this season, but may need the development in the OHL to become the complete player the Avs want him to be in the future. Same with Del Zotto, who may be doing well, but will he continue his pace and solid play for the rest of the season. Of course, NHL teams have up to 40 games to move the players back to junior.

Yet, what will happen if the players are moved back to junior?? Will it make them hungrier to play better and will they get the message that they need to get a bit stronger in order to stick a whole season?? Odds are, it could be a hinderance and make the player think that he's at his best, but still not good enough to stay with the big club. That, or they get lazy with their junior team and they regress rather than improve on the skills they need to do.

The other side of the coin, if the young player stays with the club, but is not ready for it-- does their confidence get shot that way?? We see that issue with most goalies who are kept up when they aren't developed, but who's to say that a skater would be the same way. Could a skater get ruined by being pushed into the everyday line-up and put into a higher role?? And if that player gets a bigger role in the team dynamic, would they be able to handle the pressure if they aren't fully developed in their skill set just yet??

It's definitely something that is a hard choice for the coach and GM, especially if the player is providing a lot to the team, even in the short amount of time they have played. If you keep the player in the line-up, will they keep providing the pop they have so far and will they grow on it throughout the season?? If that's the belief, you have to keep them up on the main roster. If it's anything other than that, maybe it could be he best if they sent him back to juniors and let them develop a little more and try it again next year. I can say that I don't envy the people making that kind of decision.
Posted by ScottyWazz at 11:55 AM