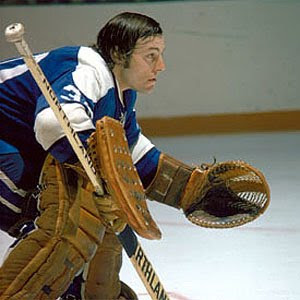 With all the hoopla going around with Jacques Plante's 50th anniversary for putting on a mask for the first time in Modern History (November 1st, 1959), we have to go to the guy who was the LAST to not wear a mask for the sake of not wearing it. This week, we turn to the man who never needed to save face, Andy Brown.

While his start was something of a low-key entrance, playing in the OHA with the Guelph Royals and Brampton 7-Ups in the 1962-63 season, playing 40 games in total with a 5.29 GAA combined in that season. Brown took an unexpected year off before returning to the ice in Newfoundland, playing with the Gander Flyers in the senior league. It was a shaky year for Brown, as he went 5-13-0 with a 5.84 GAA. However, getting back into the groove sparked his confidence for the next step.

In the 1964-65 season, Brown went to play with the Johnstown Jets in the Eastern Hockey League, playing 70 games that season with a 39-29-2 record and a solid 3.61 GAA. It was good enough for him to get sort of an audition with the AHL's Baltimore Clippers, where he played 14 minutes and allowed three goals. It wasn't much, but it was something for Brown to get his foot into the door. Brown remained in the EHL for the 1965-66 season with the Long Island Ducks going 23-19-3 with a 3.07 GAA before going back to the Johnstown for one game in a losing cause. Staying in Johnstown for the 1966-67 season, Brown saw 72 games for his troubles with a 38-25-9 record and a solid 3.79 GAA.

The play in the EHL was good enough for Brown to get a shot with the Clippers in the AHL for the 1967-68 season. Brown played in 41 games that year and held his own in the higher league with a 16-19-3 recored on the year. Two more seasons were spent in the AHL for the Clippers, with the 1970-71 season being his best, playing 52 games and going 28-13-8 and a fantastic 2.86 GAA for the year. It was good enough for Brown to take yet another step.

In the 1971-72 season, Brown was claimed by the Detroit Red Wings in the inter-league draft, thus making him a part of the Red Wings clan. Brown played for the Fort Worth Wings in the CHL (9-4-3; 3.25 GAA) and the Tidewater Red Wings in the AHL (4-16-1; 4.04 GAA) before being called up to the Red Wings roster to start 10 games for the Wings. Those 10 games saw Brown go 4-5-1 with a 3.96 GAA and on his way to some obscure moment in time. However, Brown was playing during the heated NHL/WHA rivalry for players, in which Brown was picked by the Minnesota Fighting Saints in the WHA Draft in February of 1972, which is why he could have been called up to make sure he didn't jump ship. Brown started the season with the Fort Worth Wings in the 1972-73 season, before being called up for seven games to play with Detroit; a 2-1-2 record followed.

However, in February of 1973, Brown was traded to Pittsburgh for a draft choice and cash.

Brown played nine games at the end of the '72-'73 season behind Jim Rutherford going 3-4-2 in that time. The next season, Brown got more time, leading the games played by then end of the season with 36 games posting up a 13-16-4 record and breaking the single-season record for most PIMs by a goalie with 60, which has since been broken.

On April 7th 1974 against the Atlanta Flames, Brown lossed the game 6-3, but would become the last goalie in the NHL to play without a goalie mask on. It was his last NHL game, but not his last game in the pros.

Brown had hobbies he did during the year of playing, which helped him transition from hockey to everyday life easier, like racing cars. Brown had once wanted to race the Indy 500, but he never got to that point. He did work on cars and kept them in top-notch shape, plus he raced near his hometown in Hamilton, Ontario-- often taking the checkered flag at those local events. After his retirement, Brown stayed in Indiana to raise horses.

Though he took his fair share of shots, Brown always said that he couldn't see right when he wore a mask. He did wear one in practices, but due to him not being able to see, he never wore it during the games. Yet, Brown took his bumps and bruises with pride and always seemed to deal with it gracefully. He will always be a part of history, as he was the last man standing without the mask. Here's to you, Mr. Brown.
Posted by ScottyWazz at 8:30 AM

Really great read. Never heard of the guy but still an awesome story, and probably the most absurd of all absurd goalies so far.

Sometime in the 70's, as I was driving from Ontario to Montreal, I heard on CNB an epic poem entitled "The Last of the Bare Faced Goalies". On and off for the past twenty years I have been trying to find a copy. No one but me seems to remember it.

Andy Brown must have been aware of the poem. I have not been able to find a contact for him.

Does anyone have any information?

Yeah I know him very well, and he is one greatest of men I have met, his birthday today, Andy is a young 69! We need to find this poem!!!

I watched Andy Brown in Johnstown, PA when he played for the Johnstown Jets. He was my favorite. He was so fun to watch in goal - no mask.

I'm still lookingforthe epic poem "The Lasty of the Bare Faced Golies". I don't trhinkit was written with Andy Brown in mind, perhaps Gump Worsley (?), but someone,some where has a copy

Still looking for the poem !

I train horses with Andy every single day, an awesome guy. I never get tired of the old stories!

Saw him play in Pittsburgh, he was blast to watch!!