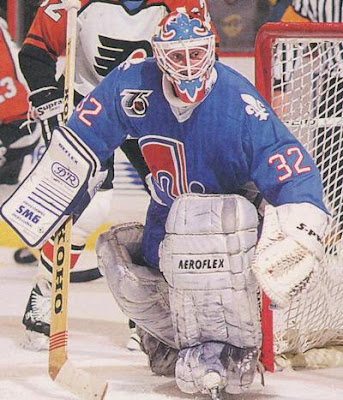 Many of the past AGMs have gone onto the coaching realm of the game, but never has one gone into that role early into their playing career. In any case, the fact he got that experience early foreshadowed his career after hockey, we present to you Jacques Cloutier as this week's AGM.

Cloutier started his career in Major Junior as a 16-year-old with Trois-Rivieres in the QMJHL. While his 16-year-old season only saw him play 24 games, it led the way for his next two seasons, which got him to two Memorial Cups. For his second year in Major Junior in 1977-78, Cloutier played in 71 games, going an amazing 46-17-7 with a 3.48 GAA during that season. It help lead the Draveurs to the Memorial Cup, but they lost in the semi-final round. It was only the start for Cloutier's legend, when he played 72 games in 1978-79 with an even better 58-8-6 and a 3.14 GAA, which was enough to capture the Jacques Plante Memorial Trophy for best goaltender in the QMJHL. The Draveurs got into the Memorial Cup again, but again-- they lost the semi-final round.

The combined record of 104-25-13 was enough to get Cloutier drafted by the Buffalo Sabres in the 1979 Draft in the third round. Though he was drafted, Cloutier spend one more year in Trois-Riviere, but it wasn't as memorable with Cloutier going 27-20-7 to close out his junior career.

His first year in pro hockey was spent with the Rochester Americans, the Sabres AHL affiliate. Cloutier was thrown right into the starter's role for the 1980-81 season, playing 66 games and going an even .500 with a 27-27-6 record. The 1981-82 season saw Cloutier spend most his time in Rochester, but make appearances with the Sabres. For the Amerks, Cloutier went 14-7-2 in his 23 games, while in five games with the Sabres, Cloutier had a 5-1-0 record, which spelt good things for him in the future, so it would seem. However, in January 1982, Cloutier suffered a broken collarbone he had to work through throughout the season. The 1982-83 season saw another split in time with the Amerks and Sabres, but the Sabres was where he spent most his time backing up Bob Sauve. With the Sabres, in 25 games, Cloutier went 10-7-6 while with the Amerks, Cloutier was still stellar with a 7-3-1 record. Cloutier was able to play in the Calder Cup playoffs for the Amerks, in which he was able to get the Amerks to the Finals and help them win the Calder Cup in a sweep.

Even with the great outings, the 1983-84 season saw Cloutier spend the entire season with the Amerks, not seeing one-spot with the Sabres. Cloutier was subpar for his standards, going only 26-22-1, but sporting a 3.83 GAA. Cloutier's play was able to settle down in the playoffs, helping the Amerks get to the Calder Cup Final again, losing to the Maine Mariners this time.

It was quite a season in the 1984-85 season, as Clouter spent a majority of time in Rochester, but got a call-up and start in November of 1984, tying the Hartford Whalers in his only appearance. Cloutier only saw 14 games in Rochester (10-2-1), but torn some ligaments in his knee in December. However, as I alluded in the beginning, Cloutier was put into an assistant coach role for Rochester after his injury.

Cloutier had one more year of split time between Rochester and Buffalo, as he was still recovering for his injury. The story was a bit off-kilter, with Cloutier playing very well in his 14 games with Rochester (10-2-2), but during his 15 games with Buffalo, Cloutier had a dismal 5-9-1 record, but a solid 3.37 GAA. In the 1986-87 season, Cloutier spent his season in Buffalo backing-up Tom Barrasso, though both were able to get close to split time. The season should be a forgotten one, with Cloutier going only 11-19-5 in his worst pro season to date. The 1987-88 season had Barrasso taking a majority of starts and had Cloutier fight off youngster Daren Puppa for some playing time. Cloutier saw only 20 games with a 4-8-2 record and 4.72 GAA.

At the start of the 1988-89 season, Cloutier was returned to Rochester, where played 11 games, and going a horrific 2-7-0, but was called up in November after Barrasso was traded to Pittsburgh. Cloutier split time with Puppa and host of other goalies that season, finishing with 36 games played and a 15-14-0 record, getting his GAA down to 3.83.

Before the start of the 1989-90 season, Cloutier was the odd-man out in the goaltending carousel for the Sabres, as he was dealt to the Chicago Blackhawks for the ever popular Future Considerations.

While in Chicago, Cloutier was able to get a majority of the games over Alain Chevier with 43. In those games, Cloutier had a respectable 18-15-2 record, but another logjam was forthcoming for the Blackhawks as with the Sabres. In the 1990-91 season, Cloutier only played 10 games with Chicago (2-3-0), but with Ed Belfour, Jim Waite, Dominik Hasek, and Greg Millen filtering through the system, Cloutier was an odd-man out again. In January of 1991, Cloutier was traded to the Quebec Nordiques for forward Tony McKegney

When he got to Quebec, Cloutier was the back-up to Ron Tugnutt and saw only 15 games with a 3-8-2 record to show for it. It was a logjam in Quebec as well, with Tugnutt, Cloutier, Stephane Fiset, Scott Gordon, and John Tanner all available. The 1991-92 season saw all the goalies, san Gordon, come back and get time with the Nords. Cloutier was thankful to get 26 games in, but only was able to get a 6-14-3 record for his troubles. His shaky time in net made the Nords go out and get Ron Hextall to be starter for the 1992-93 season and Fiset was able to get the back-up job. Even with that, Cloutier was kept on the roster and not get sent down to the AHL. Cloutier only saw three games that year and went 0-2-1. Cloutier was again caught in a logjam with the Nords, as Hextall left-- but Fiset get the starting role and rookie Jocelyn Thibault getting the back-up position. Cloutier was again on the roster, but only saw 14 games in the season and had a 3-2-0 record to close out the year. It turned out to be Cloutier's last season in the NHL.

His leadership and a twist of fate was able to get Cloutier some coaching time, even when he was still playing. He's had plenty of experiences in his career in playing and coaching, mostly ending with a logjam forcing him out in one way or another. At least he was able to get some hardware to show off his success before he was forced out. It's another story, though, of a goalie being great in juniors and the minors; but circumstances stop them from being great in the NHL.
Posted by ScottyWazz at 8:15 AM