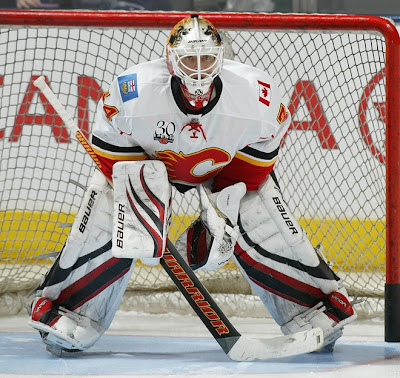 Does it make sense for Miikka Kiprusoff to go out on the record to say he won't participate in the Olympics if he's not the starter?? Considering the fact the Games are in Vancouver, it's not like he's lose much energy being a back-up on the bench, but does it make sense at all for him to do this??

If you remember correctly, Kipper wasn't on the Finnish roster for the Torino Games due to a hip injury; it was Niklas Backstrom, Antero Niittymaki, and long forgotten Fredrik Norrena. The leverage isn't really there for Kipper to go boldly go out and make this big claim that he's not interested if he's not the #1, especially when they were able to get a silver medal without him on the roster or even a second thought about it. There is no fear for the Finns with this threat of Kipper trying to rest up.

Beyond Kipper, Backstrom is there, along with Niittymaki again. Also, you have Nashville's Pekka Rinne and Chicago's Antii Niemi, as well as Boston's Tuukka Rask in the wings. Finland seems to the big factory for goalie's nowadays and to be honest-- what if Kipper doesn't show up; there's plenty of guys out there to fill his role and should be fantastic enough to make people forget Kipper is actually Finnish.

Plus, if you're the Flames fans or staff-- you'd want Kipper to skip the Olympics because since he's a workhorse for the team and will be getting a lot of action down the home-stretch, so the more rest the better. Especially if the Flames can't/don't want to get an experienced back-up, Kipper will be under pressure to carry the workload for the expectations the Flames have for this season.

Yet, Ken Campbell of The Hockey News made the best point saying that no player is above the team and the fact that Kipper is trying to dictate things to the Finnish Hockey Federation is a bad route to go for international play. Not just the Olympics, but maybe the World Championships and beyond. Maybe it's not Kipper trying to dictate at all, but him not wanting to play for his country because he's actually worn out. This could be a reverse-psychology move that could very well work out for him.

Point is, even if Kipper doesn't show up for the Finns in the Olympics-- it could be a win-win for all. The Finns win with or without Kipper because they have plenty of goalies to go around for their team. Plus, Kipper wins either way because he'd be starting for his country in the Olympics or resting for a run at the Stanley Cup. In the end, this could very well be a none-story; yet here we are talking about this slower news day.
Posted by ScottyWazz at 12:50 PM

One thing you left out: to me, it makes him look like a total asshole. The Olympics, more so than anything, are supposed to be a glorious collaboration of blahblahblah, not bickering over spots and demands. If he really just wanted rest, then he do it much more politely, asking to not come or take a back seat. If I'm Finland, as you point out, I'm good with goalies and tell him to stay home until he changes his bad attitude.