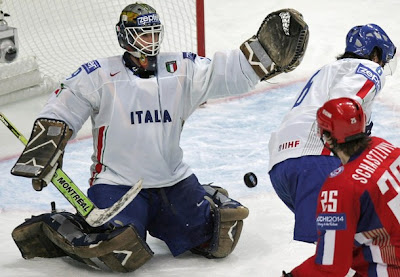 This week's inductee could have played with the most teams and log the most frequent flier miles out of the rest of the AGMs. However, he made big headlines during the 2006 Olympic Games with his heart and soul play for his adopted home country. This week, we look at Jason Muzzatti.

Though he got limited time with the St. Michael's Buzzards in Toronto through his midget (6-3-0) and Junior A (10-5-2) career, Muzzatti's play was something that got noticed by the Michigan State University team. For his troubles, Muzzatti got thrown into the fray of the Spartans net as a starter in his freshman year. While going 19-9-3 in his first year, Muzzatti was just getting started, as shown by his CCHA second-team selection. That summer, Muzzatti's potential was seen by the Calgary Flames who picked him in the first round in the 1988 Draft. Not to show it was a fluke, in his sophomore year in 1988-89, Muzzatti went 32-9-1 with a 3.03 GAA, which was his best record in his four years. Yet, even with the record, the most accolades were achieved in his third year at MSU, where he went 24-6-3 and was named to the first-team CCHA All-Star team and NCAA West Second-Team All-American for the year. However, his senior year was struggle for Muzzatti, as he went 8-10-2 and split his time with Mike Gilmore.

After his last year, Muzzatti had nowhere to go but the pros, where Muzzatti went to the Salt Lake Golden Eagles, the Flames IHL affiliate. He held his own as a first-year pro, playing in 52 games and going 24-22-5 for the season with a 3.30 GAA. In the 1992-93 season, it was a split between three teams for Muzzatti as he played in the IHL between Salt Lake (5-6-1) and the Indianapolis Ice (5-6-1), as well as playing for the Canadian National Team for 13 games (6-9-0).

For the 1993-94 season, the Flames moved their affiliate to the AHL and to Saint John, New Brunswick. Muzzatti got accustomed to the move, as he spent most of his time there, going 26-21-3 in his 52 games. Also that season, Muzzatti made his NHL debut, which was a horrific 8-4 loss against the Los Angeles Kings. It was back to Saint John for the 1994-95 season, but he was put to a lesser role with a young Dwayne Roloson being the Flames top prospect netminders now. Muzzatti only got 31 games in with a dismal 10-14-4 record for the year. Muzzatti did get 10 minutes back into the NHL, but it was to replace Trevor Kidd in a game.

While the Flames wanted to keep Muzzatti, the Hartford Whalers pluck him off of waivers before the start of the season. Muzzatti was sent down to the Springfield Falcons of the AHL to start the season, and he played strong going 4-0-1 in his five games there. That was good enough to get the call-up to back-up Sean Burke. Muzzatti got 22 games in for the season, but went a disappointing 4-8-3 even with a 2.90 GAA and .911 save percentage. It was good enough to keep him up the entire 1996-97 campaign, again backing up Burke, but getting 31 games in. Yet, even with more of a chance, Muzzatti disappointed with a 9-13-5 record and a 3.43 GAA and .888 save percentage.

Interesting note of his tenure in Hartford-- on two game in his two year there, Muzzatti racked up 12 PIMs even though he did not play a minute. One game in March of 1996, Muzzatti got 12 PIMs from the bench, while in April of 1997, Muzzatti played one second and was able to rack up 12 PIMs as well. Quite a feisty player, eh??

In the summer of 1997, the Whalers moved to Carolina to become the Hurricanes. Before Muzzati had the chance to don the Hurricanes colors, he was traded to the New York Rangers for a fourth-round pick. Muzzatti started out with the Rangers, but went 0-3-2 in his games, which sent him back to Hartford, but this time playing for the WolfPack of the AHL. He calmed down a lot in Hartford, posting an 11-5-1 record. However, Muzzatti was on the move again as he was traded to San Jose at the deadline. It moved Muzzatti to Kentucky with the Thoroughblades of the AHL for seven games, going 2-3-2 in those games. Muzzatti was also recalled by the Sharks and played a few minutes as Mike Vernon attended to family matters.

Muzzatti couldn't get a contract in the NHL for the 1998-99 season, which sent him over to Europe to play for Eisbaren Berlin; but that only last for four games. Muzzatti had to have heart surgery, which limited his playing time for obvious reasons. Once healthy, Muzzatti put up a 3.00 GAA, but no record seems to be around to web. In the 1999-2000 season, Muzzatti went up to Finland to play with Tappara Tampere and did well in his 41 games going 26-9-5 with a 2.28 GAA in that season. Once again, it was back to Germany for Muzzatti in the 2000-01 season for the Ausburg Panthers. Muzzatti played 43 games with a 3.59 GAA, but once again-- no record provided.

Yet, the most contribution Muzzatti had to the game was going back to the "Motherland" of Italy to play hockey there. It started in the 2001-02 season, playing for HC Milano to start off with. Muzzatti played for Milano until the end of the 2003-04 season. For the 2004-05 season and 2005-06 season, Muzzatti played with HC Bolzano Foxes. During that time, Muzzatti got his duel citizenship status, which allowed him to play for Italy in International competitions, like in the World Championships, where Muzzatti helped Italy get into Division 1 after the 2005 tournament.

The greatest moment of Muzzatti though may have come when he played for Italy in the 2006 Olympics in Torino, Italy. It was a big moment for the country in ice hockey, but more for Muzzatti who's first game was against his other country-- Canada. While the Italians were the vast underdog, they tried to give hope, even have a tie of 1-1 for a short time. Muzzatti made 43 saves in the 7-2 lost and garnered a lot of attention from the game. The restof the tournament was a bit of a wash with Italy getting skunked 6-0 to Finland (Muzzatti did not play), tying Germany 3-3 (31 saves), losing 4-1 to Czech Republic (18 saves in relief), and tying 3-3 to Switzerland (22 saves). However, the ties to the borderline teams of Germany and Switzerland caught the attention of most thinking that Italian hockey wasn't anything to worry about.

After the 2005-06 season was complete, Muzzatti got lured back to North America by the UHL's Flint Generals. Muzzatti split time with Bryan Worosz, with Muzzatti getting one more game and going 18-15-6 for the season, which would end up being his last pro season playing. After that season, took a few years away from hockey before the Generals called Muzzatti to make him an assistant coach in the 2008-09 season in the newly formed IHL and eventually named him Head Coach for the 2009-10 season.

While he didn't pan out like the Flames had wanted to, Muzzatti made his mark in other ways through the pipe of international hockey. He made headline in a somewhat meaningless game, but made headway for one country to be a viable option for consideration in the hockey realm. Now, he's taking what he learned to the other young kids out there as a coach.
Posted by ScottyWazz at 8:15 AM