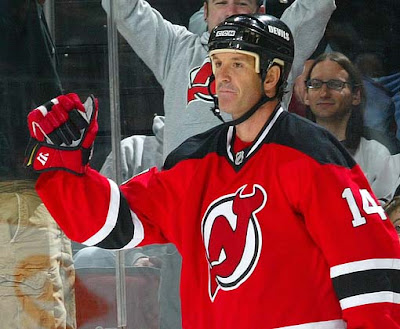 The big knock on Brendan Shanahan when he was drafted 13th overall in the OHL draft was that he couldn't skate. He silenced critics when playing with the London Knights with 154 points in 115 games in junior, enough to be drafted 2nd overall by the New Jersey Devils in 1987. And while his first year was a disappointment, the rest of his career was something legends were made of.

After 21 seasons, however, Shanahan put his family first and has decided to hang them up. The only player to score over 600 (656) goals and have over 2,000 (2,498) PIMs in their career, Shanahan could be one of the most underrated goal scorers out there. While he only had one season of over 100 points, he had 12 seasons of 30 + goals, two 50 goal seasons, but somehow always got overshadowed by other stars on the team or was on a team that never got much credit due to the market they were in. He played over 1,500 games for five NHL teams (New Jersey, St. Louis, Hartford, NY Rangers), as well as the first Canadian Olympic team to win a gold medal in over 50 years.

And while we can talk about the goals he scored, the intimidation he brought to his game, the three Stanley Cups he won; but I think the legacy he built for himself was being part of a lot of the changes to the game during the lockout that were implimented after the work-stoppage was over. The "Shanahan Summit," as it was deemed, took place in Decemeber of 2004 and was headed up by Shanny to think of ideas on how to make the game-play in the league better when it starts back up.

The Summit was unique as it gathered up people from all walks of the hockey life, with GMs, players, and some media types there in order to get a wide array of responses in order to figure out how the ideas would be received. It must have gotten some decent response, as many of those ideas were brought into the NHL. Rules like creating a Competition Committee, streamlining goalie equipment, the "Delay of Game" call for puck going over the boards, shootouts to break ties, more access to media rights holders, and reducing obstruction. While other rules like wider lines and no-touch icing weren't introduced, they were amongst topic. Of course, some of these rules aren't as well received as others, but they were put out there to the forefront and for the most part, they have worked well to make the game better since the work-stoppage.

Above all, his reason to retire makes him a class act. Shanny didn't want to uproot his family and when a team in the area (NY, NJ, Philadelphia) didn't want to sign him up, he decided that it was time to go. For a guy who was in a pretty stable area for most of his career, to put his family first when it was time to go. He had accomplished all he needed to. Three Cups, an Olympic Gold Medal, and ticket punched to the Hall of Fame in a couple of years' time. For Mr. Shanahan, his game, his personality, and his class will all be missed.
Posted by ScottyWazz at 8:58 PM