Ovie is His Own Enemy 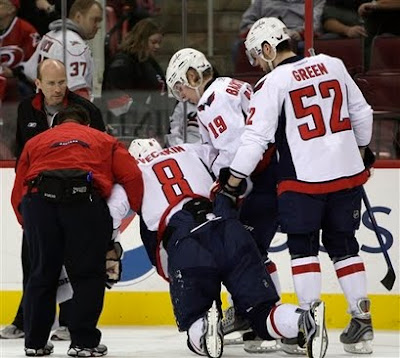 Does he want to be the villain?? Is he tired of being the guy people look at as a great ambassador to the game?? Is he trying to push the limits of his superstardom?? Whatever it is, Alex Ovechkin is really doing more worse than good for himself. He's now starting to get hurt from his actions because it is.

If I'm the Caps right now, as much as I like to have his energy, he needs to be told to calm it down a bit. Odds are, he will be suspended for this hit and rightfully so, I may add. However, the knee injury is going to be the task at hand for the Caps. The suspension is almost good for him because it'll give him games to rest up. Plus, it could settle him down when it comes to the reckless abandon he may have going on in his head.

Yet, with all this going on and with Ovie missing the games he has been having, whether it's forced or not-- is there a time where the Caps don't become his team?? I mean, you look at what Nicklas Backstrom has been able to do, it almost seems like he's taking it on as his team; much like Evgeni Malkin did when Sidney Crosby was on the shelf for the Penguins. It's a good mentality for Backstrom to have, especially with what's going on with Ovechkin.

Somehow, the injury for Ovie shouldn't be a surprise, since many people thought that his style of play, as well as karma, would catch up with him. The karma part if obvious with all the misses he's had with the suspensions on questionable hits and such. Yet, his style of play is much like Pavel Bure's, where he's open to injury more often than not. In the same breath, I don't think Bure did it to himself like Ovechkin is doing. Still-- this would probably come later in his career, which is not good for Ovie when he's the reigning MVP and going out like he's untouchable.

Whatever the case for Ovechkin may be, it's going to be something where the Caps may need to talk to him and try to calm him down before he goes a little too crazy and does long-term, irrepairable damage to himself, thus maybe sinking his team, too. Luckily, the Caps have a deep roster and could be able to bounce back sooner than most due to it. If Ovechkin wants to be a leader, he needs to start doing it on the ice by not playing so headstrong and testing the limits of what he can get away with. If he doesn't-- more incidents like this will happen, for sure.
Posted by ScottyWazz at 9:25 PM