We're less than a month away from the Winter Classic and it's time to figure out what to call this battle. Throughout the years, we've had epic outdoor match-ups in the NHL.

It's started with the Heritage Classic with the Edmonton Oilers facing the Montreal Canadiens. That was the Battle of the Dynasties, with the Oilers' coming from the 80's and the Canadiens prior to that. It was an epic battle that came down to the last five minutes and Richard Zednik getting the winner in the end. It started a trend for games outdoors on New Year's Day of all times.

The Winter Classic in 2008 saw the Buffalo Sabres and Pittsburgh Penguins. It could have been a Battle of Young Gun teams, what with both teams having a lot of ammo in their prospects, but thanks to the cultures in each city; it was the Battle of the Blue Collar, which worked because the Pens introduced their baby-blue jerseys in that epic game, which saw Sidney Crosby score on Ryan Miller in the shootout to set the tone for the NHL outdoor game.

In 2009, the Chicago Blackhawks hosted the Detroit Red Wings. The obvious approach would be the Old Guard vs. New Guard; but you have to go deeper for this. The Battle of the Sound-- the Detroit Motown scene against the Chicago blue's scene. Seemed that Motown was back in a big way with the Red Wings taking it to the young Hawks 6-4.

Yet, with the 2010 it's kind of hard to place how to deal with these two teams. You could the route of the Original Six vs. the Next Six-- you could go the Battle of the Overrated. However, we at Face Off Hockey Show have dubbed it.... 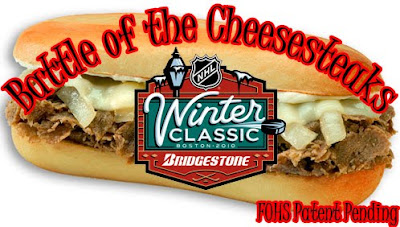 ....the Battle of the Cheesesteaks!!!

So, while it's a reach-- it's also a start. We never said we were geniuses, but we could come up with some clutch in the process. Stay tuned for more on what we have in store for the Battle of the Cheesesteaks. Plus, you can think of match-ups in the comments section for the 2011 Winter Classic.
Posted by ScottyWazz at 6:00 AM

Ha, this got me to finally post a screenshot of a weird Boston Pizza pizza on my blog; it's an ongoing obsession with me. I don't know that it has anything to do with Boston...

Detroit vs. Chicago could have been a battle of hot dogs, since Chicago fancies itself as the capital of hot dogs or something, and the Michiganders I know are fanatical about coney dogs' superiority to other hot dogs...(I try to stay neutral.)