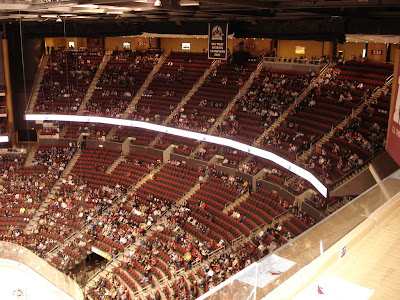 With the story of Ice Edge Holdings signing a letter of intent to buy the Phoenix Coyotes, it's something that was expected all along. As you may or may not recall, Ice Edge was a part of the bidding war, saying they would hold five home games in Saskatoon as a hook. Somehow, between all of that-- it disappeared when they signed the LOI this past week, apparently. Though it may have not disappeared forever, it seems to have faded when this whole thing went down.

Yet, Ice Edge signing the LOI comes with a lot of eye-brow raising remarks to come from it all. First off, they will apparently be paying $140M straight-cash to cover the NHL's payment, I think it is. That alone makes you wonder if they're going to give that transaction in the alley behind the NHL offices in Manhattan with briefcase in tow. Second off, Ice Edge is claiming that they aren't re-working the lease that is in place between the City of Glendale and Coyotes, which still has 26 more years left on the whole thing-- with not out-clause in it. Thus, that would keep the Coyotes there until the end of time, it seems.

Now, I've been alive for 26 years and that's a damn long time when you think about it. Especially when you have a slumping team in a slumping market, this could be the worse decision in their short tenure of being in the race for the Coyotes. They started off well in trying to Montreal Expos this thing, moving them back and forth between countries-- but to all the sudden say they are definitely all-in to the Phoenix hockey community for the next 26 years is a bit insane. Of course, the City of Glendale and NHL seems to have given out the vibe that if the prospective new owner doesn't commit to the area (read: keep the lease as it is), they wouldn't get accepted as an owner. It's a strong-arm technique, but at the same time the NHL wants this whole ordeal to work come hell or high water. It may be headstrong thinking, but at least the devotion is there-- which has rubbed off on Ice Edge it seems.

The big question I want to know is whether or not the games in Canada will be in the equation for all of this still or not. It would be interesting to see how that is handled if they are called out in this during the time of the sale. How would that work into the whole sale, as well as the lease details in all of this. Would the NHL be willing to do this for a regular season game?? Could that be a deal-breaker for it?? Was the Canadian games just a politicking to make themselves get over a little better to the court of public appeal?? Maybe we'll never know at all and this whole issue will probably fade into the background like it never happened.

Even when you have all this information, the fact that they believe that the Coyotes are going to be financially viable for those 26 years seems a bit off. Of course, saying that; they're paying $140M straight cash to start off with, so it seems these losses could be just a drop in the bucket to have a hockey team to call their own. If this, in fact, does go down; the Coyotes fans need to come out in full force, regardless of where the arena is at and regardless of how hard it is to get to the place. The Coyotes are last in attendance at an average of 9,825 through 17 home games, filling up to only 56% capacity of the Jobing.com Arena. Because, if the fans don't come out with new owners in place with a commitment to the team.....we could be in this same position five years down the line when Ice Edge starts to become part of the Bluth family and realized they made a huge mistake.
Posted by ScottyWazz at 11:10 AM

I'm thinking Ice Edge has learned from Jim Balsillie's mistakes; specifically, even if your goals and the NHL's goals differ, pretend you're going to do what the NHL wants until AFTER you get your grubby mitts on the franchise. It's a lot easier to raise hell once your name is on the door. In other words, Ice Edge very well may still want to Expos this thing, as you put it, but they're sure as hell not going to say anything right now that could even potentially piss off Bettman. They're better off being in a position to pull an Al Davis, if it comes to that.