The Snag Could Be a Red-Flag 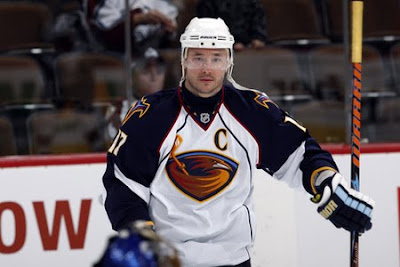 With the news coming out about Ilya Kovalchuk's contract negotiations with the Atlanta Thrashers hitting a snag; this could be the end of the Kovy era in the ATL. Granted, there's plenty of time before Kovalchuk hits the open market, but the idea of a snag is something that could cause panic for the Thrashers' die-hard. All five-dozen of them.

While Kovalchuk is saying a lot of the right things about wanting to stay and liking the organization he's with, but says that the business is what it is-- which basically puts the heat on GM Don Waddell to get something done. Now, Waddell's excuse is that the Kovalchuk camp wants fixed-years with money, but the organization is thinking differently. I don't know how you can get different from what the Kovy camp wants, but it'll be interesting to see what's going on in the organizational standpoint side of things when all is said and done.

Of course, this will be the smoking gun to maybe deal Kovalchuk towards to deadline in order for the Thrashers to get some kind of assets for it; especially if they aren't going to sign a long-term extension for the undeniable face of the franchise. To that end, it may sign the beginning of the end of the Thrashers in Atlanta. Sure, this old gag again-- but with the declining attendance despite a decent team, craziness in the ownership ranks, and plenty of markets looking to get a team relocated to their city....the lack of signing Kovalchuk could be the nail in the coffin.

Yet, what could be garnered by Kovalchuck?? I'm sure with the talent he has, the Thrashers could command a lot, but would they want to part with Kovalchuk even with the influx of talent they could get?? Especially with them fighting for a playoff spot, why would you want to even think about getting rid of your star?? You have to believe that the thought will be there. The options of getting into the playoffs or getting assets for the future will weight heavy, but the former will outweigh it.....I hope. Plus, the Thrashers could look to deal their captain at the Draft or before it hits July 1st, 2010.

Albeit, the snag could just be semantics in the grand scheme of things, but at the same time-- you can't ignore it being a big deal. Especially with a player the caliber of Kovalchuk and him possibly being on the market-- the intrigue is going to be there, even if it's a red herring to get the news onto the Thrashers and get their star's name out there in the media....more so. This is going to be one of the stories under the microscope, even with all of the posturing that has been going along with these contract talks. Fun times ahead, for sure.
Posted by ScottyWazz at 10:20 AM

I think Kovalchuk wants to be a Cap ... He envisions a line of Ovechkin-Backstrom-Kovalchuk tearing up the league scoring titles :)