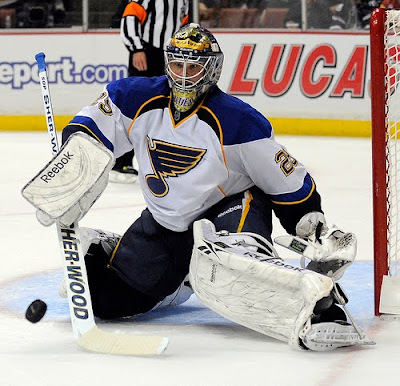 While the snow is starting to fall in Boston, creating a nice allure at Fenway Park; there is a bit of emptiness. Sure, the NHL thinks this could help things-- setting the scene that they had created in their promos for this event, there's something missing. Something that we have come to expect with an outdoor game. With this piece not being there, I'm sure that things will never be the same because of it.

That's right, this year-- Ty Conklin will not be a starter for an outdoor game in the NHL. I'll give you all a minute to recover.

Unless something is pulled off in the next few hours, Conklin will still be part of the St. Louis Blues and will be missing out on his first outdoor game; a tradition that is rooted in his appearance at the 2003 Heritage Classic in Edmonton. Since then, Conklin was the starter for the Heritage Classic and the first two Winter Classics in Buffalo and Chicago, both times for the opposing team (Pittsburgh and Detroit respectively). It would have been perfect for the Flyers to pick up Conklin because he is going to be playing an away game (where he's 2-0-0 as opposed to 0-1-0 in home outdoor games) and because they needed a goalie.

It was in 2003 when Conklin was filling in for an injured Tommy Salo and braved the cold Edmonton weather to take on the Canadiens. While he did lose, he make his mark. You have to lose before you learn how to win. Move onto Ralph Wilson Stadium in Buffalo when he put on the baby blues for the Pittsburgh Penguins and beat the Buffalo Sabres in a shootout, which was one more step for the great Conklin Classic. It moved onto Chicago's Wrigley Field where he went in as a late-fill-in for the Red Wings, as Chris Osgood tweaked his groin. Conklin got plenty of support and finally won in regulation as the Red Wings took down the Blackhawks.

Plus, Conklin has been know to create good mantra to be in the the Stanley Cup Final, as he was there the past two seasons with Pittsburgh and Detroit and was there for Edmonton, which created the amazingness of Knob Hockey for all of us. For a team like the Flyers, that kind of mojo, even with Ray Emery coming back soon, would be huge for a confident boost on that team.

Granted, all the stadiums prior (sans Edmonton) were home to teams who were so close to championships, but just came up short. The Red Sox have won recently, which may throw off his game because he's not used to seeing championship banners from this century.

But alas, it is not to be. Conklin (as far as we know) won't be at this year's Winter Classic and will break his streak of outdoor games. I still hope for a run-in with a steel chair or something like that. Doubt it'll happen, but maybe he can get there an just watch on the sidelines seething waiting for his chance and maybe putting a voodoo curse on the goalies so he could come in and be the guy who saves the game by being the goalie waiting in the wings.

The Winter Classic will miss Ty Conklin.
Posted by ScottyWazz at 12:15 PM

It will be great to watch St. Louis Blues, i have bought tickets from
http://ticketfront.com/event/St_Louis_Blues-tickets looking forward to it.