2010 Battle of the Cheesesteaks Review 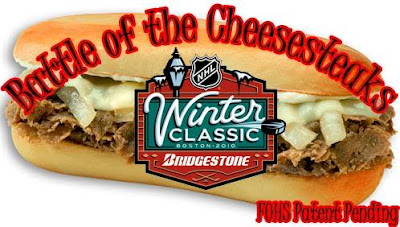 For all the FOHS Live Blog excitement, check out the replay of it with all the fun and randomness below. There was plenty of drunkenness, Ellen Page drops, Chara-bombs, Julie Gaffney drops, and just a regular FOHS gig, but in type form. Plenty of cursing, so if you're sensitive-- yeah.

As far as the game itself, the first period was a tease. There was a great pace to the first 20 minutes and it looked like the ice was the best it had ever been in the Winter Classic priors, even with the fire extinguishers for the quick re-freeze. Yet, it was not to be.

The next 37 minutes was a really slow paced affair. There seemed to be very sloppy play, many turnovers and not much flow to the entire game. However, the last three minutes and then the overtime kind of made up for the whole fact the prior 57 minutes were somewhat "meh." The old guard of Mark Recchi scoring the first goal for the Bruins to tie it up was fitting and the Marco Sturm game-winner make the Joe Thornton trade somewhat tolerable....for four minutes.

The presentation was pretty alright. The unneeded Denis Leary/Lenny Clarke "Sweet Caroline" petered out quick and was a bit unnecessary. The Dropkick Murphys were alright, but I'm tired of "Shipping Up To Boston" being used all the damn time. Makes me puke a bit every time I hear it. CBC's coverage was great, with great angles, great sound, and great coverage on the sidelines throughout Fenway Park with Elliotte Friedman. As a whole, it was another great production by the NHL and showed this thing could work.

First of all, I don't think that a second game is needed or wanted by the NHL. This is a special thing, two teams get the pass, one venue is focused on and the story continues. If you add a second game to it all, I don't think you'll have the same allure to the game that you do now. The hype would be a little killed off and you would want to cut it back to just one in the end. The NHL has to be careful when it comes to how to deal with this in the future.

Second, the teams need to be picked properly. While there are plenty of Capitals fans who though their team would be better suited and create more scoring-- is that always the best answer?? Who's to say they would be the run-and-gun team out in the elements?? I think the fact they would be not used to outdoors would be a hinderance to it all. If the Capitals are going to be in a Winter Classic, the odds are the game will be with a Western Conference team, like Minnesota or Colorado to get the fans to venture out there and give the Western teams (West of the Mississippi, that is) more exposure to this whole ordeal.

I would say the Winter Classic is a success again, but not in a landslide as it has been. There was something to this game that wasn't right after the first 20 minutes and maybe the conditions were in effect, but it seemed to slow down when the second period started. We'll have to see what the NHL does with this event next year and then talk about how the teams should be different and venue should have been somewhere else.
Posted by ScottyWazz at 3:20 PM

Whew, I thought it was just my hangover that thought the 2nd and 3rd were a snoozefest.