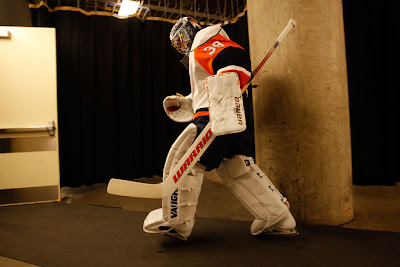 On Friday, Rick DiPietro made his first start in almost an entire calendar year, in a losing effort against the Dallas Stars. For most of the Islanders fateful, the return of DiPietro is a hope that he will remained uninjured for the duration of the season and for the duration of the remaining 12 years in his record 15 year deal. For the others, it's just fodder to wonder when the next time DiPietro will go down to injury and for how long he will be out. If nothing else, it will get people buzzing about DiPietro and the Islanders.

Yet, you wonder why there's such an uproar against DiPietro and why there is so many who are against DiPietro. While we were talking about DiPietro a few weeks ago, it seemed that consensus was that he came off a little too egotistical and really hadn't done much to earn the stripes he has gotten. Greg Wyshynski said he was a guy who was born on third base and thought he hit a triple, which is pretty much the vibe he gives off with his swagger he puts out there. I've never met the guy, so I'm not really one to talk, but he seems like the kind of guy who could be a little over-the-top into himself.

Even with all of that, you have to be rooting for him to actually get better. While there are many who like to bring up the disappointment other top picks like Alexandre Daigle and Jason Bonsignore have brought about and the fodder that comes along with the flops they became, there's a little part of me (at least) who hopes that not all of the hyped top picks will falter and fail. Yet, the cynical part of me wants to, just to have some kind of jokes to bring to the forefront. With DiPietro, there's some people who may hold something against him; especially when the Islanders chose him over Roberto Luongo when it came to who the goalie of the future would become. Of course, who's to say that Luongo would be the goalie he is if he stayed in the Islanders system or if he would have been overworked and them faltered because of the lack of support he would have gotten. Yet, hindsight being what it is-- Luongo is an all-world goalie while DiPietro is the hospital-ward goalie. See, cynicism.

Even with DiPietro coming back, the Islanders were doing pretty well with Dwayne Roloson in net. Is there going to be a point where Roloson will be be deemed the #1 goalie over DiPietro, even if DiPietro is the franchise goalie?? If DiPietro continues to start and continues to struggle, there's a point where you have to do what's best for the team and put Roloson back in the net, but will there be a move like that in time or will it be too little, too late?? Of course, there's a chance they'll platoon and as they get closer to the end of the season; then the real starter will emerge to give the best chance to the Islanders.

Whatever may happen, DiPietro coming back is the first step in his recovery to repair his first-overall pick status and to warrant his 15-year deal with the team in order to keep him with the team forever. I'm sure that's something Charles Wang is thinking, especially since he wanted this to be a steal of the century and it's turning into the dud of the decade. Still, if nothing else-- the fodder DiPietro's injuries have created will give many a lot of material every time he steps out onto the ice.
Posted by ScottyWazz at 12:40 PM

On the FOHS website the last available podcast is the Dec. 23rd one. Just Sayin'.

It sure is Anonymous, it sure is.

I have said before-- out of my hands. Sean does what he can and then Google does what it does to screw us over. Huzzah.

Put your name to it at least so I can personalize the apology more.