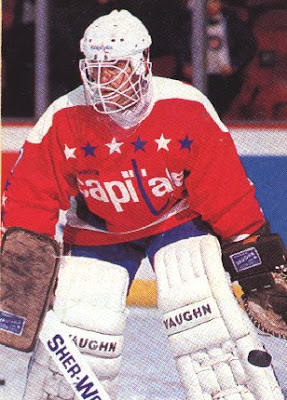 For a guy who almost ruined his career by not reporting to the NHL in order to be with his family for Christmas in his AHL city, this week's AGM made quite the career for himself after the fact. Though, once he had a stellar first few years, he started to struggle as his career went on. Even with that, he made a nice career post-retirement for himself. Folks, it's Pete Peeters.

While Peeters got his start with the Edmonton Crusaders of the AJHL Junior "A" league, he was good enough in his year with the Crusaders to get a spot on the Medicine Hat Tigers of the WCJHL (now the WHL) for the 1975-76 campaign, where he split duties with Ken Holland. Peeters first year was somewhat decent going 16-11-9 for the season. With Holland's departure, Peeters got the starting role in Medicine Hat with 62 games and a 26-24-12 record, though his GAA of 4.07 and save percentage of .877 left something to be desired. However, the Philadelphia Flyers saw something in Peeters, whom they selected in the 9th round of the 1977 Amateur Draft.

It didn't take long for Peeters to make a big jump from Juniors to the Pros, as the 1977-78 season marked his first pro season, splitting time between the IHL's Milwaukee Admirals and AHL's Maine Mariners. In Milwaukee, Peeters played in 33 games going 12-10-7, while in Maine he went 8-2-2 in 17 games there. When he got to Maine, Peeters put up a 2.80 GAA in those 17 games and made the Flyers look like geniuses for their late-round pick. During the 1978-79 season, Peeters continued to shine in Maine, going 25-6-3 in 35 games with a 2.90 GAA for the season.

Yet, in the middle of the 1978-79 season, the Flyers called up Peeters to see what he was really made of. However, Peeters at first refused to go up. It was Christmas time and Peeters had plans to be with his wife and parents in Maine. After much debate and some heated conversations-- Peeters went to Philly to play in five games there. His time in Philly for that year was less than stellar, going 1-2-1 with a 3.43 GAA in his tenure there. It was a learning experience and would help carry him in his future with the Flyers and in the league.

The 1979-80 season saw Peeters get into a decent sized role with the Flyers, splitting with Phil Myre in the net. The combo of Peeters and Myre were so good, the Flyers set a NHL record for going 35 games without being beaten, although they did have 10 ties in that span. Peeters went 29-5-5 in his 40 games played and got the call in most the starts in the Flyers playoff run, as he went 8-5 in the 1980 playoffs, helping the Flyers get to the Stanley Cup Final, but lost to the New York Islanders in six games. During the 1980-81 season, Peeters saw a little confidence sent his way by management, as the team sent Myre to the Colorado Rockies, but sent the mixed signal by splitting Peeters' duties with Rick St. Croix. Peeters got 40 games with the Flyers, going 22-12-5 with a 2.96 GAA for the year. However, Peeters breaking point came with the 1981-82 season, when the Flyers started to rotate three goalies with Peeters getting a majority of the starts, St. Croix behind him and newcomer Pelle Lindbergh making his presence known in Philadelphia. Peeters got 40 games in with a 23-18-3 record and a below average 3.71 GAA.

In June of 1982, Peeters was on the move to a better spot for himself, with the Flyers trading Peeters to Boston for Brad McCrimmon. Peeters would take over as the starter for the Bruins and lavish in the experience. The 1982-83 season saw the breakout of Peeters, as he played an amazing 62 games while putting up a 40-11-9 record with a 2.38 GAA and .904 save percentage. That season was good enough to get Peeters the Vezina Trophy nod for the '82-'83 season. He was the first Bruins goalie since Frank Brimsek, who won it in the 1941-42 season. The 1983-84 season was a rough one for Peeters, who suffered a concussion in November and then whiplash in March. Even with that, Peeters got 50 games in with a 29-16-2 record with a 3.16 GAA. That same season, Peeters was ejected in a game against Hartford in March of '84. Oddly enough, Peeters was the back-up goalie at the time and ejected while on the bench. It would not get any better in the 1984-85 season, as Peeters was injured while with Team Canada in playing during the Canada Cup with a sprained ankle. Also, Peeters would deal with hand injuries and neurological injuries as well, to the point where he needed a CAT scan for his dizzy spells. Even with all of that, Peeters played 51 games, but had his worse season yet, going 19-26-4 with a 3.47 GAA. Peeters will be known as the goalie that allowed Mario Lemieux's first goal in the NHL in October of 1984. The Bruins started off with Peeters in net for the 1985-86 for eight games (3-4-1, 3.84 GAA) before they though it'd be better to go in a different direction.

Peeters was traded to the Washington Capitals in November of 1985 for Pat Riggin. Peeters would be back into split time in the 1985-86 season, this time with Al Jensen. Peeters would get 34 games in that season, going 19-11-3, revitalizing his slumping year a season prior. The 1986-87 season saw Peeters have some injury woes with a pulled stomach muscle in the middle of the season, but also splitting more time in the Caps net, this time with Bob Mason, after Jensen was traded to Los Angeles. Peeters saw 37 games with a 17-11-4 record, as well as four games in the AHL with the Binghamton Whalers with a solid 3-0-1 record and 0.98 GAA in that time. For the 1987-88 season, it looked like Peeters was going to take off, but due to a strained knee-ligament, it held him back a bit; which allowed Clint Malarchuk to bypass him. Peeters played 35 games, with a 14-12-5 record and decent 2.78 GAA. The 1988-89 season saw a lot of twist and turns in net, with Clint Malarchuk being shipped off to Buffalo and the Caps bringing in Don Beaupre, but Peeters still got consistent starts, with 35 games to his credit. Peeters would go 20-7-3 with a 2.85 GAA; but with Beaupre's entrance, it made Peeters' disposal and not re-signed.

It allowed Peeters to re-sign with the Philadelphia Flyers in June, but for a five day span in late September and early October, there was a lot of shuffling around. The Flyers sent Peeters and Keith Acton to Winnipeg on September 29th for future considerations, but on October 3rd; Peeters and Acton were traded BACK to Philadelphia for a pick in the 1991 draft. So, Peeters was back in Philly again.

Peeters had been resigned to his role as a back-up goalie behind Ken Wregget for the 1989-90 season. Peeters went through a dismal year, playing in 24 games, but only winning one. That's right, Peeters went 1-13-5 for the year, but had a 3.74 GAA-- not what you'd expect for a one-win goalie. Peeters started the 1990-91 season in Hershey with the Bears in the AHL playing two games and going 0-1-0 before being called up by the Flyers to be the third-wheel again for the Flyers, behind Wregget and Ron Hextall. Peeters would put in 26 games, posting a 9-7-1 record and 2.88 GAA. Peeters would call it quits after that season, moving onto coaching instead.

Peeters would catch on with the Winnipeg Jets for the 1994-95 season as a goalie coach, but only lasted a season. Then, from 2002-03 until the 2008-09 season, Peeters went to work with the Edmonton Oilers as their goalie coach. After being let go by the Oilers, Peeters got the same job with the Anaheim Ducks.

There were a lot of tough times for Peeters, mostly being squeezed out due to some kind of happenstance. Yet, he has plenty of personal accolades to look at and some decent stats throughout his career; but once his injuries started to get to him, it seemed like he could never truly recover into his form he had early in his career. We'll see what he can do as a coach, because you can only do so much as a coach when it comes to teaching others about how you got successful.
Posted by ScottyWazz at 8:30 AM